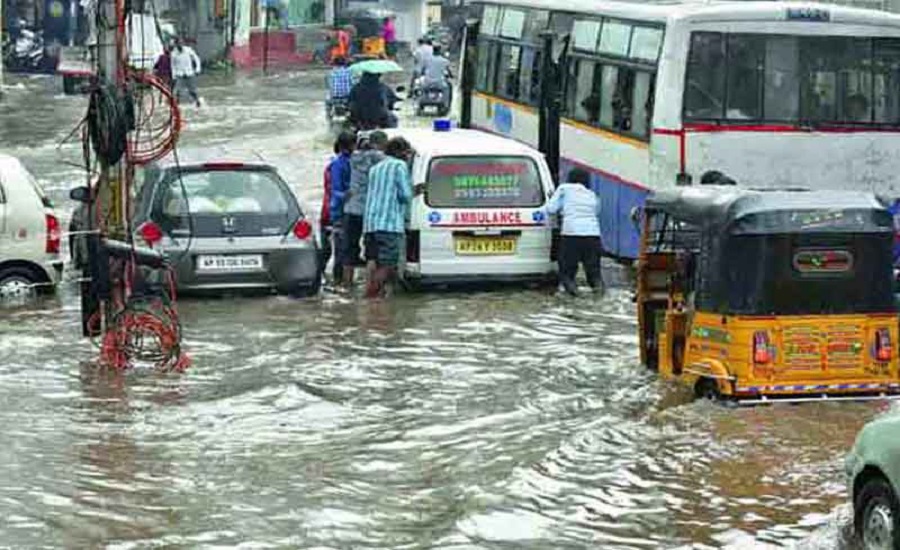 “Removing stagnant water in and around the houses and covering water tanks with proper lids will keep mosquitoes from returning to the water.”

Heavy rains slammed Hyderabad last month, inundating many areas and stranding commuters around the city. It was the most rain the city had received in September in a hundred years.

When it accumulates, rain water isn’t just water. It’s mixed with run-off, sewage, faecal matter, chemicals and a host of other substances. When it comes into contact with a source of water for human use, it renders it unsafe for drinking, befouls homes and generally macerates the landscape. It’s chock full of viruses, bacteria, parasites and a variety of other pathogens that can cause viral, bacterial and fungal diseases.

Heavy rains and floods wash off mosquitoes and their larvae, temporarily checking their breeding. But this state of affairs doesn’t last long: when flood waters recede, they leave behind puddles of putrid water stagnating all over the place, which are prime mosquito breeding grounds. Standing water facilitates rapid infection, especially of mosquito-borne diseases like dengue and chikungunya. And Hyderabad was already reeling from a dengue outbreak before the rains arrived.

Dengue has four strains, all of which have been circulating in Hyderabad. V. Ramana Dhara, an adjunct clinical professor at Emory University, Atlanta, and a professor at the Indian Institute of Public Health, Hyderabad, explained that any of these can cause a dengue infection, whose symptoms are classified as inapparent, self-managed, non-severe, severe and fatal. The community burden is due to inapparent and self-managed infections whereas the clinical burden — requiring treatment from a doctor or at a hospital — due to non-severe, severe and fatal infections, he added.

“Because infection can result from any of the four strains, and immunity to one strain does not protect from the other strains, repeat infections can occur.”

Dengue is spread by Aedes mosquitoes, principally Aedes aegypti. “Given the recent rains, there are certainly many more mosquitoes and the number of mosquito-borne diseases are [sure] to rise,” Dhara predicted.

Studies have shown floods can cause wound infections, skin rashes, gastrointestinal infections, tetanus and leptospirosis. But “in the absence of reliable statistics, it is hard to say which diseases are more prevalent,” Dhara said. “but it’s safe to say that the risk of all of the above is likely to increase depending on local circumstances.”

Although leptospirosis is less common, it cannot be discounted because it’s often misdiagnosed. It’s a bacterial disease and leads to a stubborn infection. Rats and mice have these bacteria in their urine, so when their urine mixes with rainwater, the disease can quickly spread through a city. The bacteria enter the body through the skin or mucous membranes. People with cuts, abrasions and/or scratches wading in contaminated are particularly vulnerable.

According to the US Centers for Disease Control and Prevention, leptospirosis can  develop two days to four weeks after being exposed to the bacteria. Its symptoms include fever, chills, headache, muscle aches, vomiting, diarrhoea, abdominal pain, jaundice, skin rash and red eyes. And these symptoms are often mistaken as signs of other diseases, leaving the actual infection to fester. If it isn’t treated on time, leptospirosis can lead to kidney damage, brain inflammation, liver failure, even death.

“The risk can be greatly reduced by not swimming or wading in water that might be contaminated with animal urine. Protective clothing or footwear should be worn by those exposed to contaminated water or soil because of their job or recreational activities,” Dhara said.

Apart from Aedes, there’s the Anopheles species. “Water puddles are breeding places for Anopheles species that can act as vectors for malaria parasites,” K. Arun Kumar, an assistant professor in the department of animal sciences at the University of Hyderabad, said. He works on Plasmodium parasites and malaria.

“There is a direct correlation between heavy rains, humidity and mosquito breeding. Temperatures of 22-26º C favour extensive propagation of mosquitoes,” he explained.

After mating, the female Anopheles mosquito has a tendency to feed on blood and lay its eggs in water. These eggs transform in a week’s time to larva and pupa, and then emerge as adults. When it feeds on human blood, malaria parasites already present in the human can pass into the mosquito or, if the mosquito is the carrier, the parasites pass into the human.

“Removing stagnant water in and around the houses and covering water tanks with proper lids will [keep] mosquitoes [from] returning to the water. Also, bed nets are effective in reducing the incidence of mosquitoes coming in contact with humans, thereby preventing mosquito borne diseases,” Kumar said.

Even if there aren’t stagnant pools of water, there certainly are damp surfaces, many of which aren’t exposed to sunlight either because they’re in nooks or because it’s cloudy. Mold only needs moisture and oxygen, and isn’t picky about which part of the house the dampness is in. It feeds on moist organic matter, wood, paper and cloth, and causes irritation in the eyes, cough and lung infections.

“Prevention is far better than cure,” Dhara said. “Each specific disease has well known prevention measures but implementation is lacking.”

He added that the team of workers responsible for clearing the metropolitan water-drainage system has been assigned to getting rid of such pools.

The administration hopes that the situation will be improve in the next two or three weeks, especially if the people of Hyderabad acknowledge the gravity of the situation and cooperate. “What is important is that people should come forward to improve sanitation and personal hygiene, and check mosquito-breeding spots in their living places,” Amar said.

That said, although mosquitoes don’t discriminate between the rich and the poor, the burden of disease always seems to fall on the poor. So areas with a higher density of settlement, such as slums, are more prone to disease outbreaks when it rains.

Politics in Times of Death

The Declining Economy of the ‘Holy Cow’

TikTok and controversies of...