Desi Disa – Bahul Bahujan Voice
Home Communalism There Was a Time ‘Fake News’ Was Used to Target ‘Hindus’ for...

Racist and communal poison, backed by a section of the media and intelligentsia, has long been a staple of politics.

In these days of COVID-19, I am spending a lot of time catching up on history and it is clear that there are deep connections between the evils of our present times and what happened in days gone by. Whenever there is a clash between truth and belief, there is politics of the worst kind.

In his paper, ‘The historical perspective of Americans of Asian Indian origin 1790-1997’,  Srirajasekhar Bobby Koritala charts the course of Indian immigration to the United States – how the migrants found their feet and the hostility they faced on foreign lands because of outlandish beliefs about them. He lists two categories of people: ‘Great Americans’ who helped Indians in the US, and a ‘Rogues’ Gallery’, where, amongst others, he places Theodore Roosevelt – “racist, imperialist, colonialist, Anti-Asian, anti -Indian’. It is fortunate that despite the former US president’s official standing as a “historically respectable personality,” no one in the US has so far sought to dub Koritala an anti-national.

From trade to labour

In the benign days before they became victims of racism, hundreds of Indians whose main occupation was trade travelled to the US in the 1880s and became so well known that plays like ‘The Rajahs Daughter’ and ‘Cataract of the Ganges’ were staged and there was a popular song titled ‘The Hindu Girl’.

However, things began to change a few years later when larger numbers of Indians, mostly Sikh farmers who migrated from Punjab on account of the unfair practices of the British colonial government, settled along the West Coast of North America, from California to Canada. Most of them worked in lumber mills in British Columbia and  Washington, and on the railroads. They started to do particularly well on the farms in the Sacramento region of California, but they aroused suspicion and were described as ‘treacherous’, ‘filthy’, the ‘least desirable race’, ‘unsanitary’ and carriers of deadly diseases. Evidently, their physical appearance, social customs and religion were not acceptable to the residents who were distrustful of anything not familiar and akin to their own.

Sarah Isabel Wallace in her book, Not Fit to Stay: Public Health Panics and South Asian Exclusion, notes that “while racism and fear of labour competition were at the heart of” exclusionary policies,  “public leaders – including physicians, union leaders, civil servants, journalists, and politicians – latched on to … unsubstantiated public health concerns”  to justify the exclusion of South Asians. She writes that this process began when a story broke in the Blaine Review in the fall of 1907 that the newly arrived South Asians working in the mills were responsible for a meningitis outbreak the previous spring. A Methodist bishop, James Mills Thoburn, who had lived in India for 30 years and had recently returned, said, “Hindoo immigration to the coast was responsible for a great deal of the plague, cere bro spinal meningitis and other disease that have been sweeping the country; South Asians were leaving India in the hopes of escaping the plague, the germs of which they carry with them.”

What Thoburn said was in the category of ‘fake news’, since it was not based on any scientific study, but it appealed to the US public who were in any case opposed to the migrants.

Sikhs, typically addressed as ‘Hindus’, with their traditional long hair, turbans and beards were particularly unacceptable. And then there was the perceived threat of losing jobs as this ‘pauper labour’ was evidently crushing them. Interestingly, US officials had no idea about the religions of India, and it is said that a copy of Koran was put into service in courts for ‘Hindus’ to swear on.

Slowly, anti-Asian hysteria started to build up in Canada and along the US Pacific coast. In 1905, racist Americans formed the Japanese and Korean Exclusion League and in 1907 a Canadian ‘Asia Exclusion League’ (AEL), appeared.

In 1906, Mary Wilson, living in Vancouver, wrote a letter to a local newspaper saying:  “We do not propose to have a Hindu town or bazaar rather, with its vicious evils and attendant undesirable element… We shall have the plague, cholera and other deadly fevers and diseases here among us, if such is not stopped in time.”

Antagonism towards Indians enchanted the press as negativity usually does. In a 1906 headline, the Puget Sound American asked its willing readers, “Have we a dusky peril?”, adding, in case the meaning was not clear: “Hindu hordes invading the state”. A reader wrote, “I consider their (Hindus) advent in this country very undesirable … their code of morals is bad (from our point of view) and if allowed the freedom, which they naturally expect in America, they will eventually become troublesome.”

In a May 1907 article for the Pacific Monthly magazine titled ‘The Hindu Invasion; A New Immigration Problem’, Fred Lockley, a leading American journalist, wrote. “Our kinsmen (Indians) in the far East are turning their faces westward. Here and there a tiny crevice has appeared in the dam that has held them in check for so long. They are trickling through in a slight and apparently insignificant stream into the Western lands but will the stream gradually enlarge till it floods our lands and menaces our institutions?”

Significantly, the US Supreme Court did not initiate a National Population Register at the time. And the United States still does not have one. 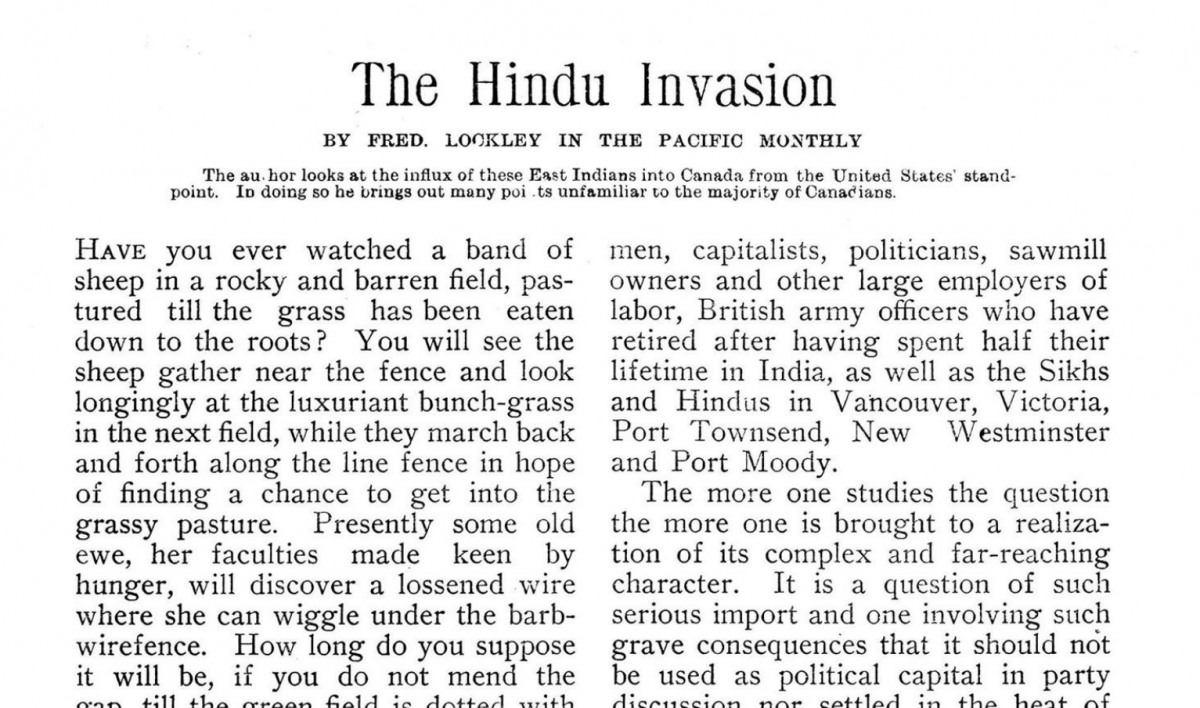 But to proceed, the first public meeting of the AEL was held on August 12, 1907, where the MP of Vancouver warned of “an invasion of Asiatics who are swarming into our country every month” and ‘the inevitable result of this great influx of the yellow race will be the retreat of the white race already here”.

The next day, the Vancouver World newspaper headlined a story on its front page – ‘All Parties Opposed to Asiatics’ – and in its editorial wrongly reported that “with the arrival of 160 Hindus on the steamer Athenian and with 2,000 Japanese reported to be on the Indiana which sailed from Honolulu to Vancouver last Tuesday, it is evident that the invasion of Asiatics to British Columbia continues.” In today’s terms, this claim was fake news for the Indiana only had 275 Japanese but the newspaper never apologized.

To encourage people to plod on, it is often said that Rome was not built in a day. Similarly, riots do not happen in a day. It is only when the mind is completely full of indoctrination and 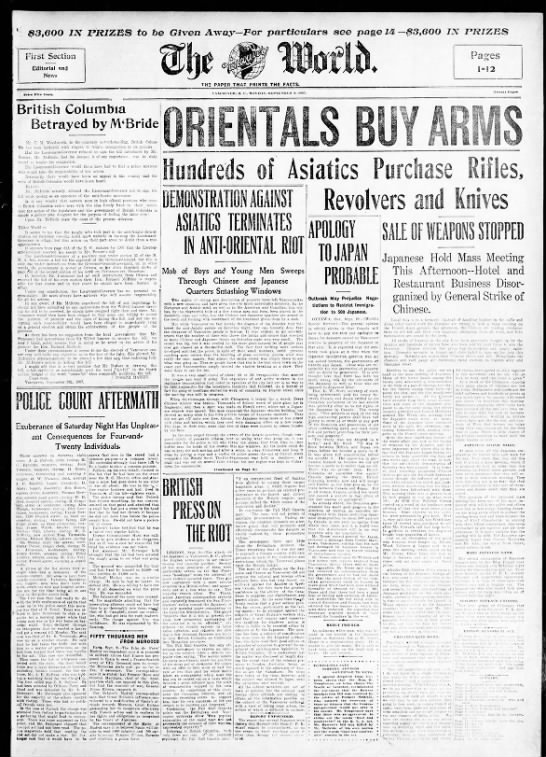 poison that riots happen. Hence what happened in Bellingham in the state of Washington on September 4, 1907, a Sunday when around 500 whites rioted, screaming, ‘Drive out the Hindus’ for about five hours and vandalised their houses and belongings, and took out several men and beat them up, it was not a one off incident. That night, 200 Indians were confined in the City Hall and the rest fled never to return.

But their escape to Everett did not help them and riots happened there on November 5, 1907, following the same pattern and typically the Police just watched. The next day, local newspapers reported that ‘the police were helpless’ and ‘all authority was paralyzed’.

Not a single person from the mob was prosecuted. I do not intend to make this sound familiar. As I said, the reader’s freedom of deduction I shall honor.

Four days later, September 10, 1907, The World in Vancouver carried a news report, ‘Orientals Buy Arms. Hundreds of Asiatics Purchase Rifles,’ and that sale of weapons was stopped. I must say self- preservation often involves violent means.

After the riots, the Bellingham Herald on September 10, 1907 was of the opinion that, ‘ the Hindu is not of us and can never be……He brings nothing to our country but diseases and filth and a little labor,  in return for which he subtracts some of our capital.’

Though the newspaper condemned the violence, it concluded, ‘the Hindu is not a good citizen’, The Reveille said, “While any good citizen must be opposed to the means employed, the result of the crusade against the Hindus cannot but cause a general and intense satisfaction, and the departure of the Hindus will leave no regrets.”

The Seattle Morning Times argued it was “not a question of race, but of wages; not a question of men, but modes of life; not a matter of nations, but of habits of life… When men who require meat to eat and real beds to sleep in are ousted from their employment to make room for vegetarians who can find the bliss of sleep in some filthy corner, it is rather difficult to say at what limit indignation ceases to be righteous”

Just to be clear, racist or communal organisations with three-letter acronyms like the AEL were not alone in marginalising the Hindus (actually, all Indians). The wider intellectual class was complicit and lent immense legitimacy to these beliefs. 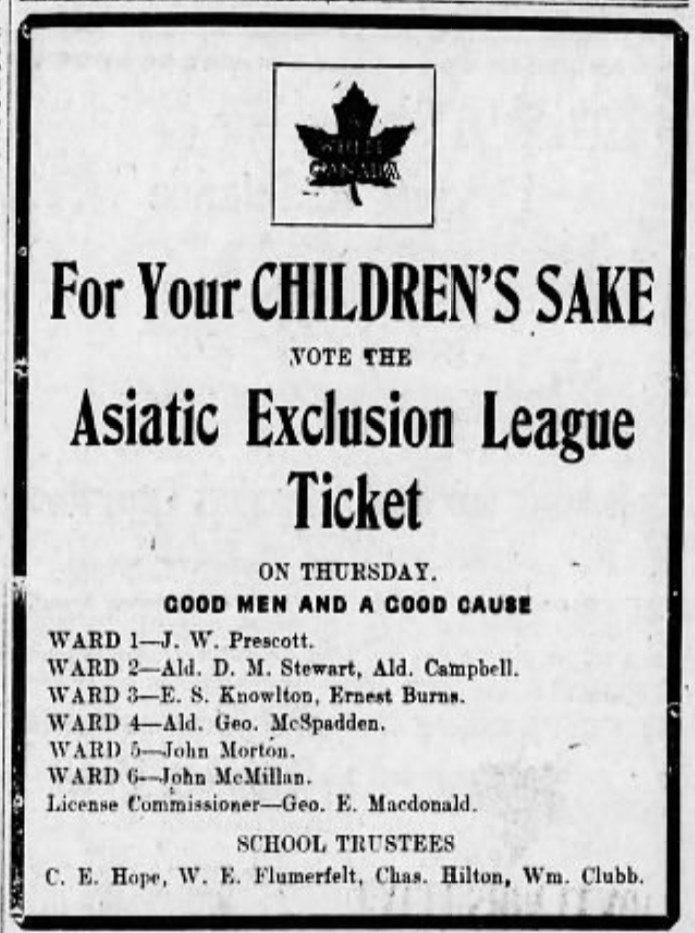 The potency of this vilification may be gauged from the content of tickets in the following format sold for a 1908 event. It says: ‘For your CHILDREN’S SAKE, Vote the Asiatic Exclusion League Ticket… GOOD MEN AND A GOOD CAUSE.’

Children were thus bartered for violence, and violence justified in the name of a good cause.

If this rings a familiar bell, please do not blame me. I am only setting out what history says, on trusting the written word.

To return to where I started, whenever there is a clash between beliefs and truth, politics plays its part. Thus the ‘Asiatic Barred Zone Act’ came to be enacted on February 4, 1917, which effectively meant that persons from barred zones, which included India, could not enter the United States, and thus Indians – and not ‘Hindus’ alone – became blacklisted for the purposes of immigration, on beliefs unsupported by truth.

Let us learn lessons from history. Let us not repeat mistakes, especially when human lives are involved. Let us not play politics with precious human lives.

UPSC: Why EWS Quota Denies SCs, STs and OBCs Their Due

Gunjan Saxena and sexism in the Indian Air Force

The Music of Twenty-First-Century Uprisings

Third ‘encounter’ of non-Maoists in Telangana in 10 years, two led...