Desi Disa – Bahul Bahujan Voice
Home Blog Who wrote the Preamble to the Indian Constitution? That is one of...

An excerpt from ‘Ambedkar’s Preamble: A Secret History of the Constitution of India’, by Aakash Singh Rathore.

Babasaheb Ambedkar, Chairman, Drafting Committee of the Indian Constitution with other members.

On 17 November 1949, Bhimrao Ramji Ambedkar, chairman of the Drafting Committee launched the proceedings of the Constituent Assembly of India, by moving “that the Constitution as settled by the Assembly be passed”. The transcripts recording these proceedings stated in brackets that there were “cheers” from the members of the Assembly upon hearing the motion.

Dr Ambedkar’s motion was the beginning of the third reading of the draft Constitution by the Assembly. It had, over the course of the previous year, passed through two readings already. This was to be the final round.

Naziruddin Ahmad, a Constituent Assembly member representing West Bengal, had persistently been a staunch and vocal critic of the draft Constitution ever since it first made its appearance in the Assembly on 4 November 1948, at the time of the first reading. The text of the draft, he asserted, contained a “number of errors, anomalies, redundancies and repetitions”. He squarely placed the blame on the Drafting Committee for these problems.

These outward criticisms of the draft Constitution were fuelled by an inward suspicion of the Drafting Committee itself. Beneath the surface of Ahmad’s critique of the text lay his frustrations over the process of its drafting.

Ahmad believed that the Drafting Committee, led by Dr Ambedkar, had engaged in a drafting process that lacked transparency, making changes to the draft Constitution without the knowledge or consent of the Constituent Assembly.

He made his private suspicion a public accusation in the Constituent Assembly, enumerating grammatical and syntactical changes that were there for everyone to see. On 25 November 1949, he quipped:

This is only a punctuation amendment which, I think, the Drafting Committee would accept, though not openly, at least secretly.

The evidence that Ahmad produced was primarily to do with syntax. The insinuation, however, extended to semantics – to meaning. Was the Drafting Committee engaged in a secret process of altering the meaning of constitutional words and phrases?

Several others in the Constituent Assembly thought so too. As the transcripts revealed, members K. Santhanam (from Madras), RR Diwakar (from Bombay) and Maulana Hasrat Mohani (from the United Provinces), could often be heard grumbling on this point in the Assembly:

Santhanam: The Drafting Committee . . .I think illegitimately converted themselves into a “Constitution Committee”. They have taken upon themselves the responsibility of changing some vital provisions adopted in the open House by this Assembly…

Diwakar: The Drafting Committee and its chairman…not only drafted the decisions of the Constituent Assembly but, in my humble opinion, it has gone far beyond mere drafting. I may say it has reviewed the decisions, it has revised some of the decisions and possibly recast a number of them…

This allegedly clandestine process is one of the secrets that this history of the Preamble unravels. But it is not the only one. 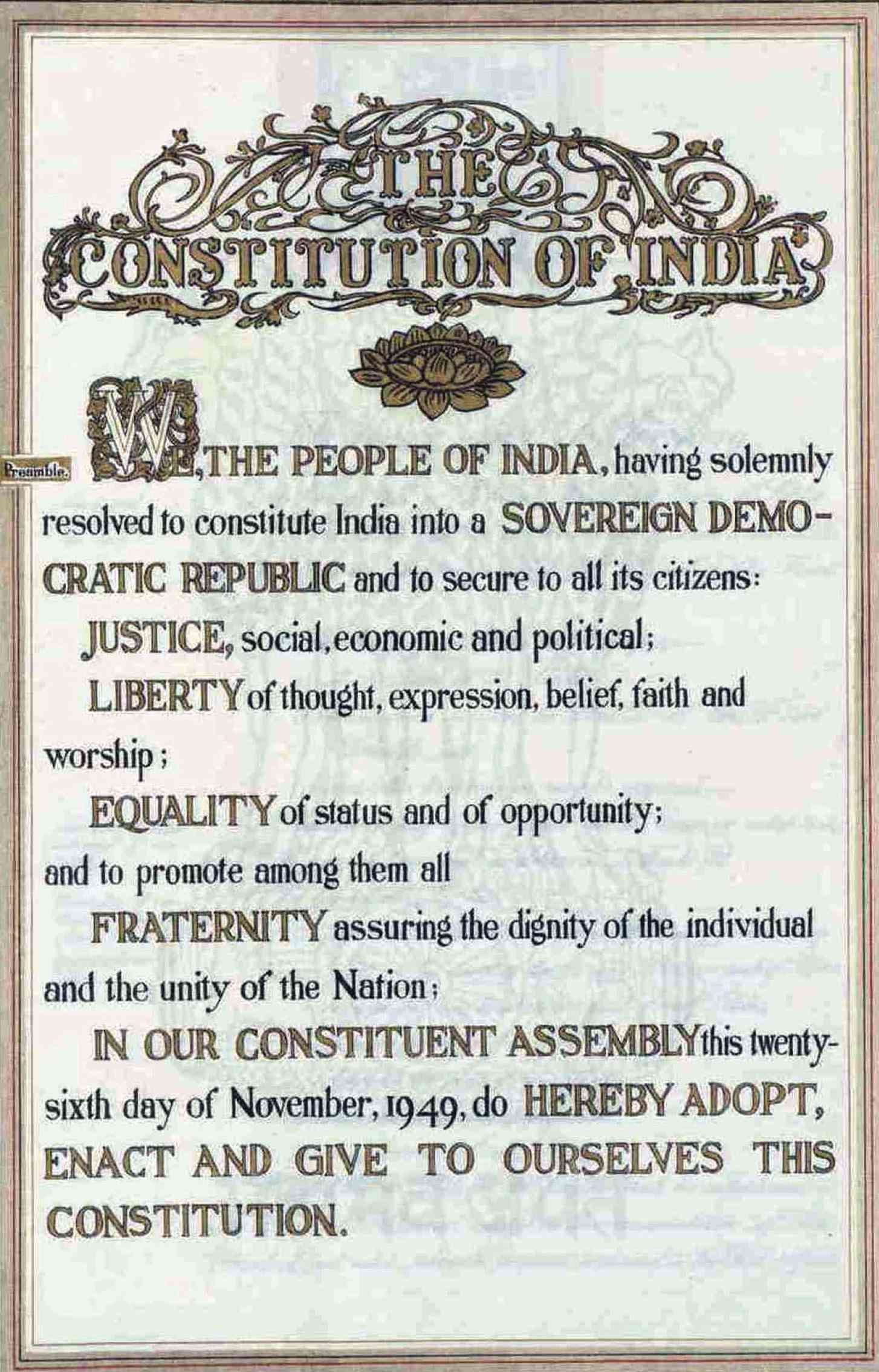 The Preamble to the Indian Constitution

Who wrote the Preamble to the Constitution of India? If that sounds like the sort of question you might expect to find in a Union Public Service Commission (UPSC) coaching manual, that’s because it is. The answer that such manuals invariably offer is wrong.

The authorship of the Preamble is shrouded in a cloak of mystery. Unlike the Constituent Assembly, we have no verbatim transcripts for the Drafting Committee meetings where all sections and articles of the Constitution were presented, discussed, dissected, debated, modified and finalised. Instead of transcripts, we have minutes. And in those crucial Drafting Committee meetings, when the Preamble was up for discussion and finalisation, we don’t even have all of the minutes.

There are four competing narratives about the authorship of the Preamble.

The first, which for the purpose of convenience we can call the UPSC coaching narrative, is that Jawaharlal Nehru was essentially responsible for the Preamble. It was on the basis of his Objectives Resolution that the Constituent Assembly unanimously adopted the “aims and objectives” of the future Constitution of India. The complaint that we just heard from Constituent Assembly member Mohani threw this option open to question.

The second is a sophomoric view of sorts because it mixes advanced knowledge about the history of Constitution-drafting in India with prejudice against Dr Ambedkar. In this account, it is BN Rau who is credited with authorship. It was in his role as Constitutional Adviser that he was tasked with putting together a full, working draft Constitution that would form the basis of the Drafting Committee’s future labour.

The third account attributes authorship to the Drafting Committee as a collective whole, joyfully adding that each of its members played a part. While this makes for a pleasant historical narrative, useful for evoking that warm and fuzzy national sentiment that we seek to read into the collaborative origins of the Indian Republic, it is belied by the facts. ENT

As TT Krishnamachari – a member of the Drafting Committee and the author of memoirs and audio-recorded interviews that offer an inside look – himself detailed, out of the seven original members of the Drafting Committee, one died (D. Khaitan), one was away in the United States (Krishnamachari was referring to BN Rau here, who was not actually a member), one was engaged in the affairs of the state (N Gopalaswami Ayyangar), and two (Md Saadulla and N Madhava Rao) could not be in Delhi owing to ill health. In short, Krishnamachari claimed that five of the key persons actually had either little, or no contribution, in the drafting process:

So it happened ultimately that the burden of drafting the Constitution fell on Dr Ambedkar, and I have no doubt that we are grateful to him for having achieved this task in a manner which is undoubtably commendable.

As far as the drafting and finalisation of the Preamble was concerned, there were only four members present in the early meetings, and only three in the final meeting. One, of course, was Dr Ambedkar, who never missed a single meeting.

And thus we come to the fourth view, which grants BR Ambedkar authorship of the Preamble – not definitively or particularly, but by default. Given the ubiquity of Dr Ambedkar’s designation as chief architect of the Constitution, it seems to follow that he must also be the chief architect of its Preamble. This view is problematic on two accounts. The first problem is that the drafting of the Constitution and the Preamble were two very different, albeit overlapping, processes. This will become clear as we explore its secret history.

The second, which is not the concern of this book, relates to the debates surrounding the distinction between “author” and “architect”. While most of this debate, motivated by caste prejudice and identity politics, is not worth attending to, it does necessarily challenge the logic of default authorship of the Preamble. That is, just because a person is the designated “chief architect” of a document does not necessarily mean that he or she is its “author” too.

The fine obituary speech for Dr Ambedkar that the then prime minister Jawaharlal Nehru delivered in the Lok Sabha on 6 December 1956 further reinforced the widespread designation of Dr Ambedkar as chief architect. Nehru had said, “He is often spoken of as one of the architects of our Constitution. There is no doubt that no one took greater care and trouble over Constitution-making than Dr Ambedkar.”

Critics, however, are quick to point out that in his own 25 November 1949 concluding remarks regarding the Constitution-making process, Dr Ambedkar liberally portioned out the credit that the Assembly was bestowing upon him to many others, both inside and outside of the Drafting Committee. Of course, the simple exercise of common sense would indicate that for Dr Ambedkar not to spread credit would have been megalomaniacal, which by all accounts was alien to his nature.

But more important than these two problems assailing the view attributing default authorship of the Preamble to Dr Ambedkar was the lukewarm nature of the attribution itself. So much focus was placed on foregrounding his role in the drafting of the overall Constitution that his authorship, specifically of the Preamble, got blurred in the background.

Until then, it will be valuable to amplify attention on the Preamble in particular, because the message of this truly wondrous and historic set of eighty-one words – both the immediately discernible message as well as the secretly encoded one – merits as wide a dissemination as possible. Stated succinctly, the Preamble trumpets our collective aspirations as a republic; indeed, it articulates the principles that precondition the possibility for our unity as a nation.

Keeping poor safe in lockdown is state responsibility, not an act of charity

Is the National Lockdown in India Constitutionally Valid?

How India’s lockdown has put women at a greater disadvantage

Coronavirus Pandemic: How to Mitigate the Lockdown Impact on Vulnerable Populations

A song – On Veterinary Doctor Raped and Murdered in Shadhnagar...

Inside JNU hostel, a masked mob selectively attacked rooms – based...