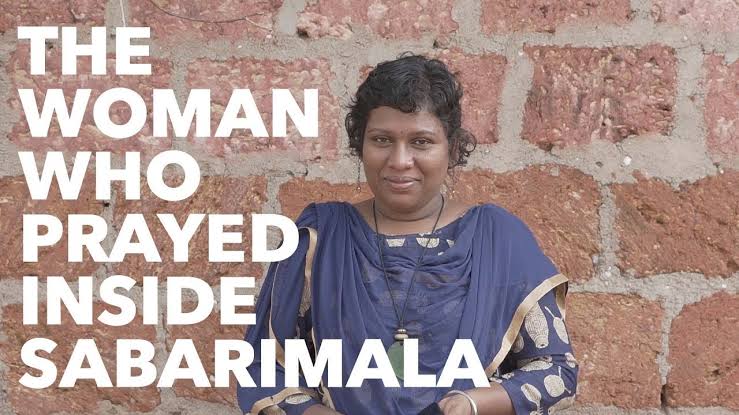 Bindu Ammini has single-handedly braved the entire might of the Sangh, a neutered public, and an opportunistic state. She will never be forgotten.

The assault on Dalit gender equality activist Bindu Ammini, by a fervent Ayyappa devotee, reveals the fragility of the Hindu nationalist male ego and a deals a chink to the Hindutva armour.

Like other nativist and anti-pluralist projects, Hindutva is premised upon the restoration of a primeval order that involves the dominance of man over woman, father over son, savarna over avarna, avarna over Dalit, fair skin over dark, state over subjects, religion over law, priest over devotee, teacher over student.

These hierarchies are deemed a ‘natural state’ of affairs that pesky, allegedly Hindu-hating progressive social reformers have disrupted using ideas perceived non-“Indic,” such as equality and scientific temper.

Thus, denying women their right of worship at Sabarimala is indubitably a ruse to restore most of these hierarchies in one stroke. Borrowing the words of a BJP leader it is a “golden opportunity”.

The video of the attack on Bindu and its aftermath are fascinating reflections of the multi-faceted anxieties of/in majoritarianism.

We first see Bindu in all-black, exiting the office of the Kochi police commissioner (what better location to reassert the pre-eminence of the mob over law, but more on that later). A bearded devotee wearing the traditional saffron mundu (both beard and mundu are symbolic of Ayyappa devotees during the mandatory ritual purification for the divine trek) walks up to Bindu casually and suddenly pepper sprays her.

He actually used a pepper spray! I give you a few moments to absorb that.

The same pepper spray designed for single women like Bindu to defend themselves when venturing into desolate spaces. But here, that weapon of defiance against male aggression and entitlement, was deployed by a group of religious men against a single woman in broad daylight, right under the noses of journalists and policemen.

How did Bindu react? If the expectation was fear, then prepare to be disappointed. Obviously rattled, she starts looking for her assailant in the crowd. The media personnel and the police gather around asking her what had happened; they have not yet seen the video of the attack.

By now, an angry crowd of devotees gathers around the equally angry Bindu who keeps repeating how her face became smeared with pepper.

“Drama! Drama!” the devotees scream in a frenzy, presumably expecting the crowd to believe that Bindu had applied harmless material on herself to garner attention. In response, Bindu takes some of the red gooey stuff from her face and applies it gently onto a skeptical devotee’s cheek.

Then she spots her attacker lurking in the area, runs towards him and whacks him on the back. Bewildered by this turn of events, this thick-set man, clearly bigger than her, moves quickly into the safety of the mob of devotees.

Bindu pursues her target and demands that the still unresponsive police arrest him. Her feisty and steady response enrage the mob even further. One of them with his arms around the shaken attacker (who is still holding the pepper spray canister!) shrieks “who are you to demand an arrest?”, using the derogatory “nee” in Malayalam.

The middle-aged devotee with a cheek smeared with pepper can then be seen complaining to the mob and the same hapless police officer that Bindu had slapped him. The devotees now rally to his defence and, bizarrely, accuse Bindu of assault.

“How dare you raise your hands against men? Don’t you dare get into the habit of slapping men!”

It is a funny and exhausting sequence of events.

Disturbingly, throughout this episode, chants of “Swamiye Ayyappo” by men and women can be heard in the background. What used to be an inspiring rhythmic prayer to help overcome the physical struggle of the tough climb up Sabarimala has now been appropriated and converted into a sinister background score for mob violence.
The non-puranic woman.

The drama inevitably moved to the evening talk shows that even in erudite Kerala often deteriorates into unseemly trading of insults. Bindu was invited to speak along with two members of the Sangh Parivar.

The social theorist Pierre Bourdieu has explained how elites use subtle inflexions of language to identify and ferret out upstart interlopers from within their cultural space. This prompts those who aspire to this elite-ness to try hard to emulate these cultural markers.

While representatives of the Sangh and their opponents who belong to the same milieu were seen using the chaste Sankritised Malayalam (that is the default now even in Malayalam films), Bindu responded in her raw earthy dialect (often used in films to caricature oppressed classes).

The Sangh has by now perfected the art of implausible deniability. Of course, the Sangh Parivar are against attacks on women, they insisted, and attributed the attack to unrelated fringe groups.

This despite the fact that the BJP candidate for the recently concluded by-polls can be seen right in the middle of the mob that harassed Bindu. The gradations taken for granted within the Hindutva echo chambers was made vivid when one of them said – “There are, after all, many women in our puranas”.

As irreverential as ever, Bindu responded with aplomb, “Go to hell” (poyi pani nokke).

She further said, “I don’t need your sympathy”.

Now the Sangh’s minions exulted that Bindu had showed her “level” to the viewers through her crude language. Implying perhaps that Bindu, who clearly does not fit into the puranic mold, is not the type of woman that is worthy of respect.

Why “clearly”? Bindu is a Dalit who has dared to transgress the limits set by the Brahmanical patriarchy. What disturbs her male detractors is that she remains undeterred from asserting herself, in spite of their judgement. She had the sharpness and wit to respond on air to the allegations of crudity in language with “it isn’t the quality of language you use, but your conduct that matters”.

One would be forgiven for wondering whether Kerala was a Hindutva-ruled state.

Can a woman who is a symbol of progressive thought and an irritant for religious bigots be brazenly attacked under the noses of policemen under any other ideology? There is a difference between the attack on Bindu and the chilling images of lynching in presence of the police, but only in degree and not in content.

What is the threshold of violence a mob must cross for the police and the public to spring into action? The thought is not comforting.

The tepid public response to this brazen mob violence is just another in the series of events that have been regularly piercing the veneer of a progressive society that Malayalis claim to inhabit.

Significant sections, even when opposed to majoritarianism, clearly still hold regressive and prejudicial attitudes against an assertive, Dalit, woman. As many shocked observers noted after last year’s violence at Sabarimala, social reform in Kerala was incomplete and for the past decades, a convenient fiction.

Obscurantism and medieval feudalism that was claimed to have been uprooted has been nurtured in the private sphere, clandestinely and resentfully. The growth of religious nationalism started boiling the bottled-up bigotry that had since burst and shattered even the need for pretence. Masquerading as tradition, medieval practices and attitudes (that had taken social reformers a hundred years of painful struggle to partially dismantle in the window offered by the independence struggle) appear to have now become respectable.

The most egregious dereliction is without doubt, by the government and the Left-front that chose to prioritise “peace in Sabarimala” — a euphemism for placating religious voters, particularly from the elite among the backward castes Ezhavas that form a significant section of their core voters (and that the BJP is eyeing).

It is paradoxical that fewer than a hundred years ago, Ezhavas who are now at the forefront of the “defence of tradition” argument had been treated just like or worse than Bindu, using the same arguments that traditions are sacrosanct. The Devaswom minister while condemning the attack on Bindu seemed more interested in locating a conspiracy to disrupt Sabarimala.

The law minister, himself a Dalit, vociferously denied any association with Bindu’s plan to visit Sabarimala. Upholding lofty ideals like gender equality and rule of law seem to no longer be electorally sensible.

Maybe the criticism is unfair as the government is playing a crafty game to avoid another bout of violence similar to last year by sparking the powder keg that Kerala has become.

The party and the state may be steering the state through waters made unpredictable by the rise of Hindutva and Islamism, and intractable violence between Christian factions. But it is reasonable to ask whether citizens in Kerala can expect protection from a mob if it means hurting religious sentiments.

Rosa Parks of our time

Bindu has risked her life and limb to remind us of some basic truths. Women without obvious insecurities make men uncomfortable. Hegemony requires the consent of the oppressed.

She has shown us the tenacity of patriarchy and has exposed the casteism lurking behind the facade of tradition.

For single-handedly braving the entire might of the Sangh, a neutered public, and an opportunistic state, Bindu Ammini’s name will be etched in the history of progressive struggles against oppression.

The way in which it was executed, India’s lockdown itself became source of virus’s spread