The gap between the number of households demanding MGNREGA work and the number who were provided work has been the highest in 2019-20. This indicates that even if demand fell, supply of work fell even more.

Jobs generated under the Mahatma Gandhi National Rural Employment Guarantee Act (MGNREGA) have shown a dip compared to last year after July. This comes even as 2018-19, the year that preceded the Lok Sabha elections, saw a record number of households demanding as well as being provided employment under the flagship rural public works programme.

Chart 1 shows the total number of households whose demand for work was registered by the gram panchayat authorities concerned and also the number that were actually provided work (MGNREGA is supposed to guarantee 100 days of total employment to adult members of any rural household that “demands” such employment). In 2018-19, demand was registered from 5.88 crore households, and 5.27 crore of them were provided work. These numbers were the highest, at least during the last five years of the present government. Even in terms of person-days of work generated, the numbers rose from a mere 165.64 crore in 2014-15 (the first year of the Narendra Modi government) to 267.99 crore in 2018-19.

The current year, however, has witnessed a clear dip in the person-days of employment under MGNREGA, which is visible after July. Significantly, in all the months before, including those leading up to the elections of April-May, the work provided exceeded the corresponding levels for 2018 (Chart 2). According to government officials, the fall in MGNREGA employment after July has been largely due to the onset of the southwest monsoon. Rainfall during the monsoon season (June-September) this year was 10% above the historical long-term average — the highest since 1994 — whereas it was 9.4% below average in 2018. An above-normal monsoon meant there was lower demand for MGNREGA work. 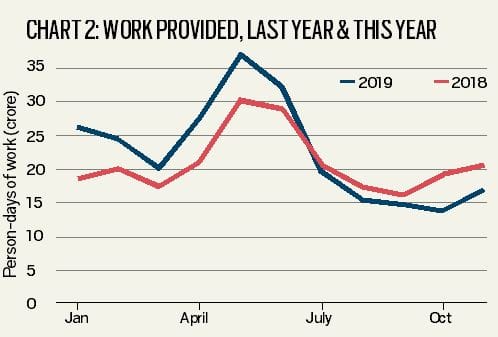 However, from Chart 3, it can be seen that the gap between the number of households demanding MGNREGA work and the number who were provided work has been the highest in 2019-20. This indicates that even if demand fell, supply of work fell even more.

The trends raise the question whether all this is linked to lack of funds. For 2019-20, the Modi government has allocated Rs 60,000 crore towards MGNREGA. But out of this budgeted sum, Rs 9,493.80 crore would be required for clearing the liabilities of wages, material and administrative costs for previous years. Nikhil Dey of the advocacy group Mazdoor Kisan Shakti Sangathan claimed that in 2018-19, the Centre had asked some state governments to pay wages to workers for February and March in advance and treat this as “loan” that the Centre would repay the states in the new financial year. 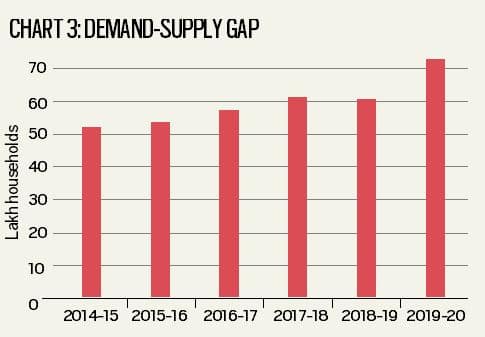 The cost of providing a day’s work to a single person has been taken at an average of Rs 249.86 for 2019-20. For 270.21 crore person-days of work that was approved, the MGNREGA labour budget alone for this fiscal worked out to roughly Rs 67,514.67 crore. But the total budgetary allocation, which also includes provision towards material and administrative expenses, has been only Rs 60,000 crore, out of which Rs 55,829.62 crore was already spent as on December 24. Meanwhile, the Centre has revised upwards its original plan of providing 260 crore person-days of work for 2019-20 to 316.73 crore person-days, following a decision to augment the number of days of employment per household under MGNREGA from 100 to 150 in flood-affected districts of states such as Karnataka.

It is not MGNREGA alone that is witnessing a deceleration of activity this fiscal. The same goes for the Pradhan Mantri Kisan Samman Nidhi (PM-KISAN), the Modi government’s farm income support scheme that was launched in December 2018, ahead of the Lok Sabha elections. In the first instalment released for December 2018 to March 2019, as many as 8.05 crore farmers were covered, with each of them receiving Rs 2,000. Those numbers fell to 7.43 crore in the second instalment (April-July 2019) and further to 5.91 crore in the third (August-November). In all, the total amount disbursed under the income support scheme in the year 2019-20 is Rs 32,320.86 crore, which is significantly short of the Rs 75,000 crore budgeted for it. Further, of the total Rs 95,000 allocated for the scheme since its inception, Rs 48,421.65 crore has been spent up to December 2019, which is roughly half the allocated sum.

Even the number of rural houses built under PM Awas Yojana-Gramin — which had recorded a sharp rise from 11.96 lakh in 2014-15 and 18.22 lakh in 2015-16 to 32.13 lakh, 44.55 lakh and 47.33 lakh during the following three fiscals — has seen a drop to just 7.2 lakh so far in 2019-20. A senior government official clarified, however, that the process of registration, geo-tagging, etc has already started, and more houses will be built later in the year. The official also cited a target of building 60 lakh houses under the PM-AY Gramin by June 2020. Up to 55 lakh new homes are under construction, and 7 lakh have been completed.

Coronavirus lockdown: 30 steps government should take to ease the suffering of the poorest Indians