“The troops are not yet mentally schooled to accept women officers in command,” the Centre argued.

New Delhi: The Centre has told the Supreme Court that women are not suitable for commanding posts in the Army because male troops are not prepared yet to accept women officers. The government was responding to a plea by a few women officers, according to a report in the Times of India.

“The composition of rank and file being male, and predominantly drawn from rural background, with prevailing societal norms, the troops are not yet mentally schooled to accept women officers in command,” the Centre said in an affidavit that essentially justifies sexism in official policy.

Maintaining that male and female officers could not be treated equally when it came to postings because of their different physical standards, the Centre also cited greater family demands, the perils of women being taken as prisoners of war and reservations about over-exposing women officers to combat situations to oppose the plea.

Representing the women officers and opposing the Centre’s plea, lawyers Meenakshi Lekhi and Aishwarya Bhatti pointed out that many women had displayed exceptional bravery in adverse situations and cited the example of Minty Agarwal who, as flight controller, had guided Wing Commander Abhinandan when he shot down a Pakistani F-16. She was later awarded the Yudh Seva Medal. The advocates also cited the example of Mitali Madhumita, who was awarded the Sena Medal for her bravery when terrorists attacked the Indian embassy in Kabul.

However, the Centre contended that the armed forces required sacrifices and commitment from the entire family of service personnel, and the separation and frequent transfers affected the education of children and the career prospects of the spouse

“It is a greater challenge for women officers to meet these hazards of service owing to prolonged absence during pregnancy, motherhood and domestic obligations towards their children and families, especially when both husband and wife happen to be service officers,” the Centre said.

He also said that if a women officer was taken as a PoW, it would be a cause for extreme physical mental and psychological stress for the service and the government, and such a situation could be best avoided by keeping women away from direct combat.

Balasubramanian also said that future wars were likely to be “short, intense and lethal” and given the hybrid nature of warfare, the “induction of women officers into Indian Army, hitherto a male bastion, needs to be viewed in the perspective of changed battlefield environment”.

“The officers are expected to lead their men from the front and need to be in prime physical condition to undertake combat tasks. Inherent physiological differences between men and women preclude equal physical performance resulting in lower physical standards and hence the physical capacity of women officers remains a challenge for command of units,” the Centre held.

However, the bench also hinted that a complete bar against women officers holding command posts was not appropriate and that women should be allowed to do the same as per organisational requirements and suitability.

Citing the example of the induction of women into the police force, the bench said, “A change of mindset is required with changing times. You need to give them opportunity and they will serve to the best of their capabilities”.

Military historian and professor at Ashoka University Srinath Raghavan called the Centre’s argument that male troops would not accept women officers an “extraordinary and regressive claim” and likened it to the justification used by the British during colonial rule.

An extraordinary and regressive claim. Reminiscent of British Raj’s claims that Indian soldiers would never accept Indian commanders. Military training is about fundamentally reshaping norms and attitudes that soldiers bring from their social backgrounds. Previously, former army chief of staff and current chief of defence staff General Bipin Rawat had raked up a controversy when, in an interview, he said that women were not ready for combat roles because they were responsible for raising children and would feel uncomfortable at the frontline or would accuse jawans of peeping into their quarters.

The Centre’s stand also drew criticism for legal experts. Karuna Nundy, an advocate in the Supreme Court said the government was relying on the “unproven” sexism of its troops in order to justify its own sexism.

The *government* sets out unvarnished misogny – “they won’t take orders from women” – and pregnancy discrimination as a reason for suppressing army women.

i.e. government is sexist because troops are sexist. I doubt the latter has been proven. So what are we left with? 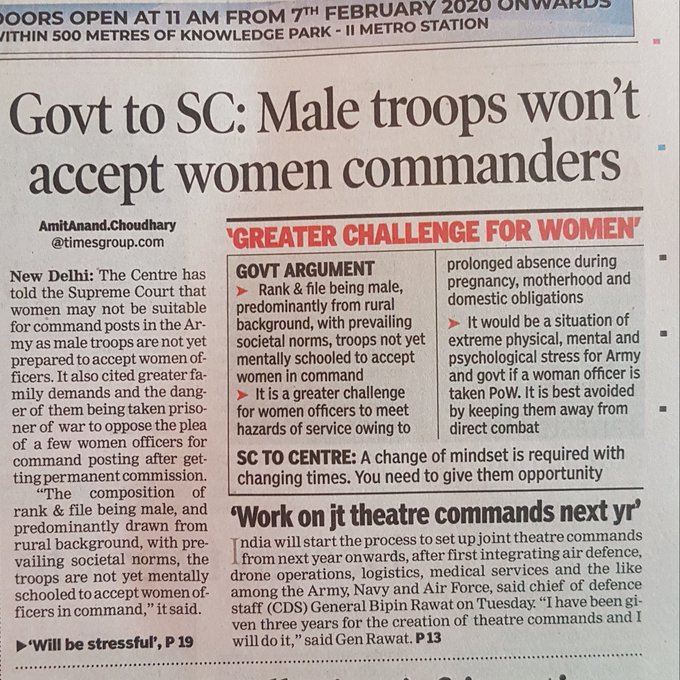 Think tanks’ role growing: Is that a good thing?