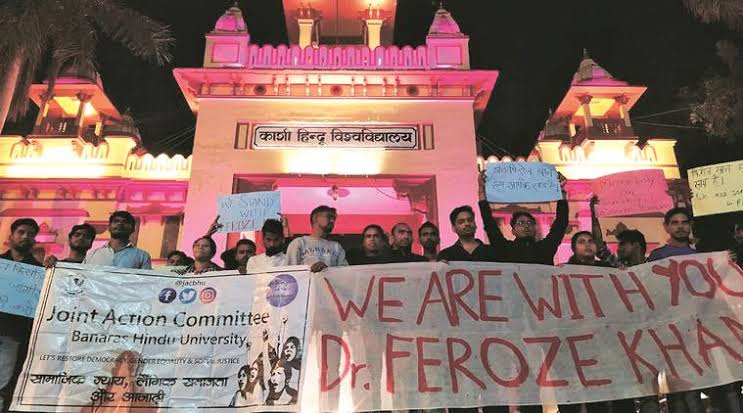 Feroz Khan had been the unanimous choice for assistant professor of Sanskrit literature of a selection committee at Banaras Hindu University in Varanasi (pictured).

A Muslim scholar of Sanskrit has gone into hiding after protests from some rightwing Hindu students claiming that, as a Muslim, he cannot teach Sanskrit, the ancient classical language of Hinduism.

Feroz Khan, 29, was the unanimous choice of a selection committee at Banaras Hindu University in Varanasi for the post of assistant professor of Sanskrit literature. The committee members were impressed with his erudition, which stems from a childhood passion for the language that continued into further education.

But on 7 November, two days after Khan took up the post, members of the Akhil Bharatiya Vidyarthi Parishad, a rightwing student organisation with a Hindu nationalist ideology, staged a campus protest demanding that Khan be moved to a different faculty.

One placard read: “A Muslim cannot teach us our religion.” They vowed to keep protesting until Khan was transferred to another post.

Khan has been stunned at the protests. His Muslim family, who live in a village not far from Jaipur in Rajasthan, is unusual in that his father, Ramzan Khan, also studied Sanskrit and is famous in the area for singing Hindu devotional songs and working as a volunteer in a cow shelter. Hindu priests in the area have come out and supported his son’s appointment.

Before vanishing, Khan made only a few remarks to the media. “Since my childhood, till the completion of my studies … I never faced any discrimination because of my religion. This is so disheartening. A group of students don’t want me to teach them Sanskrit because I am not a Hindu,” he told the Times of India.

Sanskrit is 3,500 years old and has the same status in Hinduism as Latin did in Christianity – only it is not quite as “dead” as Latin. It is still used in some academic and literary circles, as well as during Hindu and Buddhist religious rituals and ceremonies.

So far, the university has stood firm. It issued a statement saying Khan’s appointment was final and that it was committed to providing “equal opportunities to everyone irrespective of religion, caste, community or gender”.

But Khan has left the university for the moment. University officials confirmed that he had left on Tuesday to go home for a while and would return when things had calmed down. But when journalists visited his home, Khan was not there and his father said he did not know his whereabouts. They did not respond to calls from the Guardian.

No minister from the ruling Bharatiya Janata party (BJP) has come out in Khan’s support. The Bollywood actor Paresh Rawal, a former BJP MP who is still affiliated with the party, tweeted: “Stunned by the protest against professor Feroz Khan. What has language to do with Religion!?!?!? Irony is professor Feroz has done his masters and PhD in Sanskrit. For Heavens sake stop this god damn idiocy!”

Meanwhile, other students on the campus have come out in support of Khan and his right to teach Sanskrit, along with some members of Hindu nationalist groups.

… like you, are reading and supporting the Guardian’s independent, investigative journalism than ever before. And unlike many news organisations, we made the choice to keep our reporting open for all, regardless of where they live or what they can afford to pay.

The Guardian will engage with the most critical issues of our time – from the escalating climate catastrophe to widespread inequality to the influence of big tech on our lives. At a time when factual information is a necessity, we believe that each of us, around the world, deserves access to accurate reporting with integrity at its heart.

Our editorial independence means we set our own agenda and voice our own opinions. Guardian journalism is free from commercial and political bias and not influenced by billionaire owners or shareholders. This means we can give a voice to those less heard, explore where others turn away, and rigorously challenge those in power.

We hope you will consider supporting us today. We need your support to keep delivering quality journalism that’s open and independent. Every reader contribution, however big or small, is so valuable.

The Alienation of Adivasis From Our Identity, or How I Unlearned My Hinduisation

In Mohan Bhagwat’s India, Everyone Is a Hindu