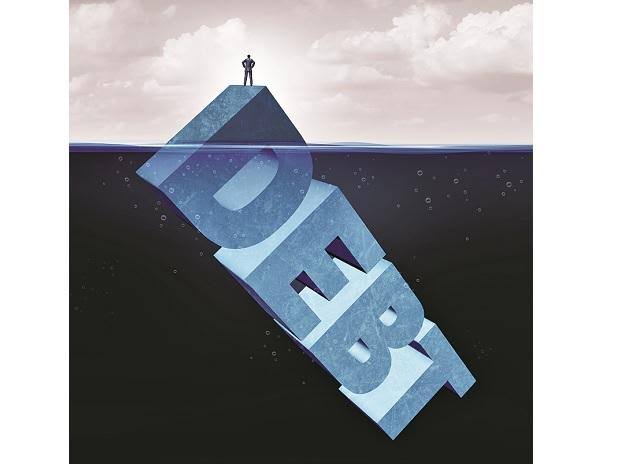 Total funded advances outstanding to 30 wilful defaulters – along with the amount the banks have written off so far – adds up to over Rs 50,000 crore as on April 30, 2019.

New Delhi: Four years after the Supreme Court first directed the Reserve Bank of India (RBI) to disclose a list of India’s wilful defaulters, the central bank has finally complied.

In response to a Right to Information (RTI) application filed by The Wire in May 2019, the RBI has released a list of 30 major wilful defaulters.

For over ten years, the RBI has denied RTI applicants this information arguing that it would be against the economic interests of the country and its ‘fiduciary relationship’ with the banks disallows it from doing so.

While the central bank has been reluctant to release this data, individual banks and lenders have always generated information on wilful defaulters in the form of suits filed for recovery of their dues. This data has, over the years, been collated by TransUnion Cibil.

According to the central bank’s response though, three companies belonging to fugitive diamantaire Mehul Choksi are amongst the 30 major wilful defaulters that the Indian banking system is currently grappling with.

Total funded advances outstanding to these 30 companies – along with the amount the banks have written off so far – adds up to over Rs 50,000 crore.

To put this in perspective, as of December 2018, over 11,000 companies had willfully defaulted on amounts worth over Rs 1.61 lakh crore, according to TransUnion Cibil data.

The wilful defaulter data released by the RBI comes from a large centralised banking system database called ‘CRILC’ – the Central Repository of Information on Large Credits. This is a pool of data on the credit information of all borrowers who have an exposure of Rs 5 crore and above. CRILC has in the last three years been particularly useful as a data-sharing mechanism between banks as well, to identify errant borrowers and ensure they don’t try to cheat the system.

From February 2019, banks have had the option in CRILC to categorise whether a borrower is a wilful defaulter or not.

The RBI defines a borrower as a ‘wilful defaulter’ if the company has not met repayment obligations despite having the capacity to do so. While a ‘wilful default’ tag does not necessarily imply wrong-doing on the part of the promoters, the classification is also used while referring to loan fraud cases, where the borrower has diverted the loan for purposes other than those initially stated.

The table below, therefore, is a list of borrowers flagged as ‘wilful defaulters’ by banks. The amounts of money given in the table is the sum of ‘funded advances outstanding’ and amount ‘prudentially/technical written-off’ as on April 30, 2019.

The data does not contain total bad loans or non-performing assets of these wilful defaulter accounts.

Many of the names on the list are well known – Gitanjali Gems, Rotomac Global, Zoom Developers, Deccan Chronicle Holdings, Winsome Diamonds, REI Agro, Siddhi Vinayak Logistics and Kudos Chemie. All these companies, or their promoters, have been slapped with cases by either the Central Bureau of Investigation or the Enforcement Directorate over the past five years.

Some of these firms also allegedly appeared on the list that former RBI governor Raghuram Rajan gave to the Prime Minister’s Office. This list was given as part of an appeal by Rajan for quicker action to be taken by India’s probe agencies.

While very few of these investigations have reached their logical conclusion yet, the agencies have filed chargesheets for some and attached assets as part of the loan recovery process in others.

The wilful defaulter list also contains the names of other known companies, where it is unclear if there has been any wrong-doing on the part of the promoters.

Ruchi Soya Industries: In December 2017, IDBI Bank declared Ruchi Soya was a ‘wilful defaulter’, a classification that the company said that it would legally challenge.

Under the IBC process, over the last year, the company has been bought out by Patanjali Ayurved Ltd.

In 2018, two media reports indicated that Ruchi Soya may be under the scanner of investigative agencies. According to DNA Money, the company allegedly fudged its accounts to present a misleading picture to lenders. Separately, in June 2018, reports indicated that the company was being investigated by the Serious Fraud Investigation Office for certain transactions it had made with a Singapore-based firm.

ABG Shipyard: In March 2018, the company’s lenders pushed for a wilful default tag, with media reports from the time indicating that the resolution professional had conducted a forensic audit of the company’s accounts.

At the time, ABG Shipyard, which owed over Rs 16,000 crore to its lenders, issued a statement saying, “The question of being a wilful defaulter does not arise as the finances are not being controlled by the erstwhile promoters but the lenders and Resolution Professional.”

The company is currently under the process of liquidation after no buyers could be found for it in the insolvency and bankruptcy process.

It is unclear when the company was declared a wilful defaulter or whether there has been any fraud detected yet. However, on November 3rd, almost three weeks ago, Hanung Toys promoter Ashok Kumar Bansal and his wife were detained at the Delhi airport following a look-out circular issued by PNB.

According to media reports, authorities detained the Bansals while they were coming back from Dubai.

S Kumars Nationwide: This company has for more than a few years now struggled with repayment of loans (reportedly between Rs 5,000 crore to Rs 8,000 crore) and was declared a wilful defaulter by a few lenders.

In June 2019, the National Company Law Tribunal gave its assent to liquidate S Kumars after no suitable buyer could be found. There is no publicly available evidence to indicate any wrong-doing or fraud in this case.

Over the last decade, the RBI has been reluctant to release this type of data.

In 2011, a clutch of RTI applications which sought a wide array of information from the RBI reached the Central Information Commission’s (CIC) doorstep. The then central information commissioner Shailesh Gandhi directed the RBI to disclose the information asked by petitioners, including a list of wilful defaulters.

Deliberating on the RBI’s argument that its ‘fiduciary relationship’ with banks ties its hands from disclosing information on defaulters, Gandhi noted that the benefits to the country from disclosure of the information outweigh any potential damage that may be caused.

“This (disclosure) could lead to safeguarding the economic and moral interests of the nation. The commission is conv­inced that the benefits accruing to the economic and moral fibre of the country, far outweigh any damage to the fiduciary relationship of bankers and their customers if the details of the top defaulters are disclosed,” Gandhi wrote.

Soon after the RBI approached the Delhi high court against the order and got a stay.

In all, the CIC issued 11 orders directing the RBI to disclose various information which had been withheld by the RBI since long and had been sought in 11 different applications by applicants.

In 2015, the Supreme Court while hearing a related matter (Jayantilal N Mistry vs RBI), decided to club the 11 matters and hear them together. In December that year the SC upheld Gandhi’s 2011 order and directed the RBI to disclose the information that had been asked for by the RTI applicants, including the list of wilful defaulters.

But, even after that, the RBI continued to deny to RTI applicants – including The Wire –  the information that the SC had directed it to disclose.

Some of the petitioners approached the SC seeking contempt action against the RBI for not complying with the top court’s order. The SC in April 2019 said that the RBI is duty-bound to disclose the information and any further violations could lead to contempt of court proceedings. 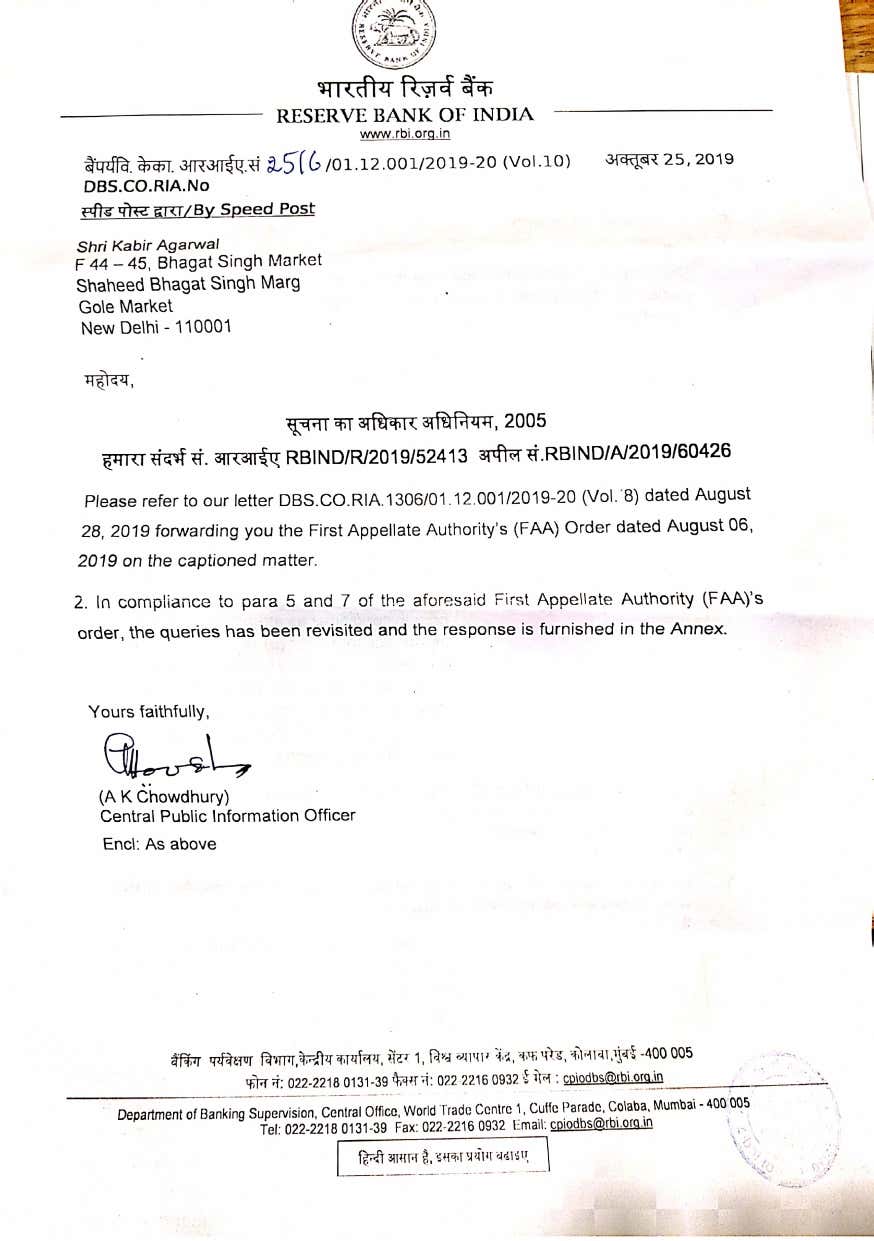 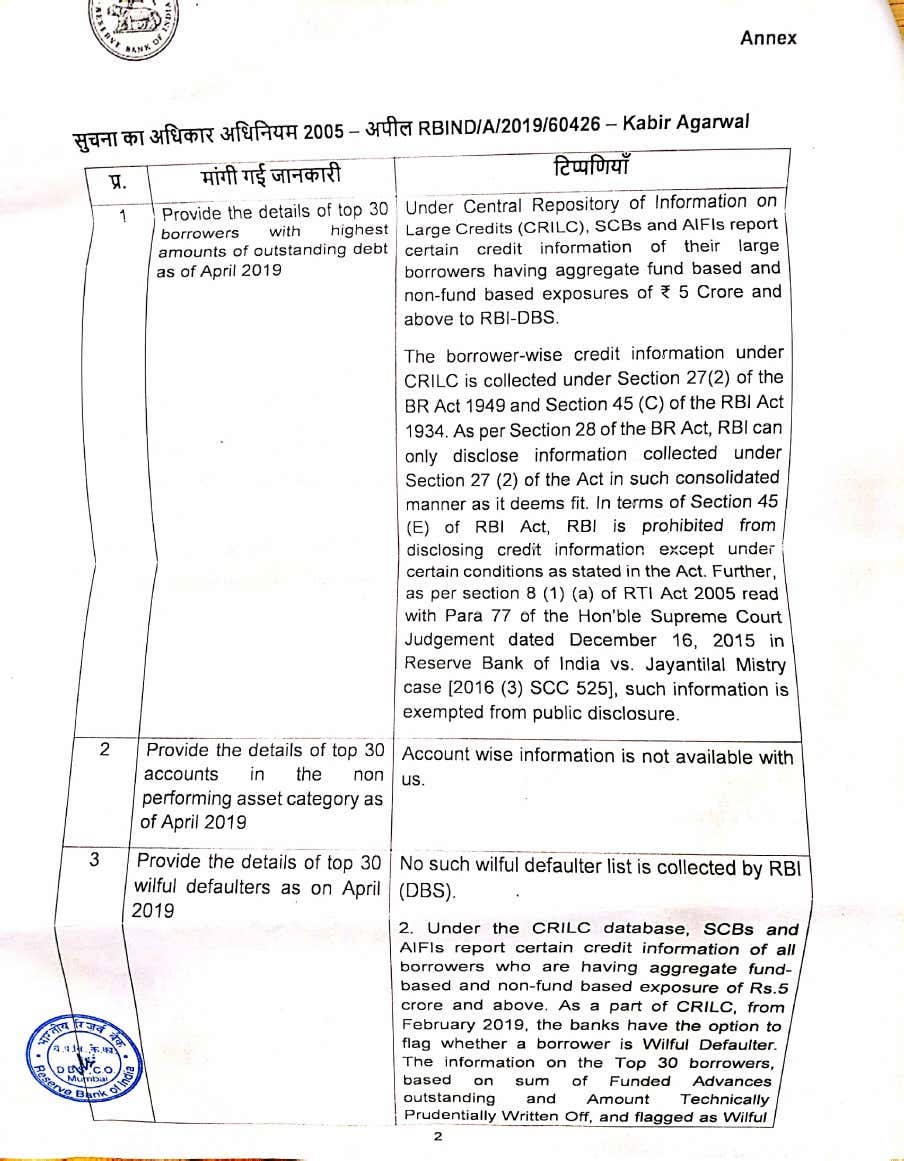 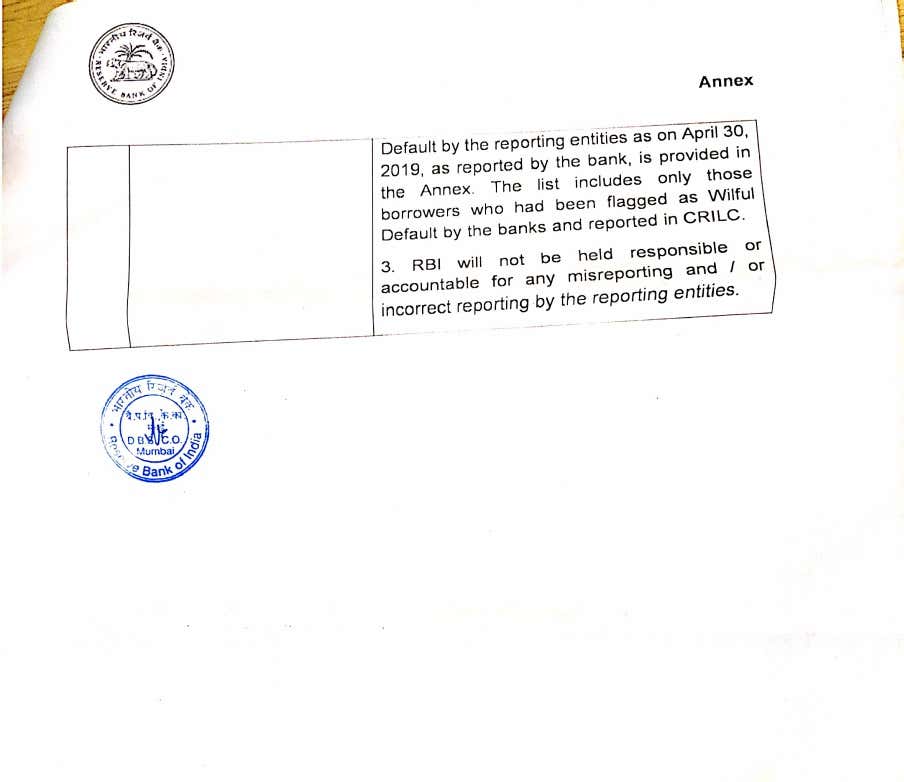 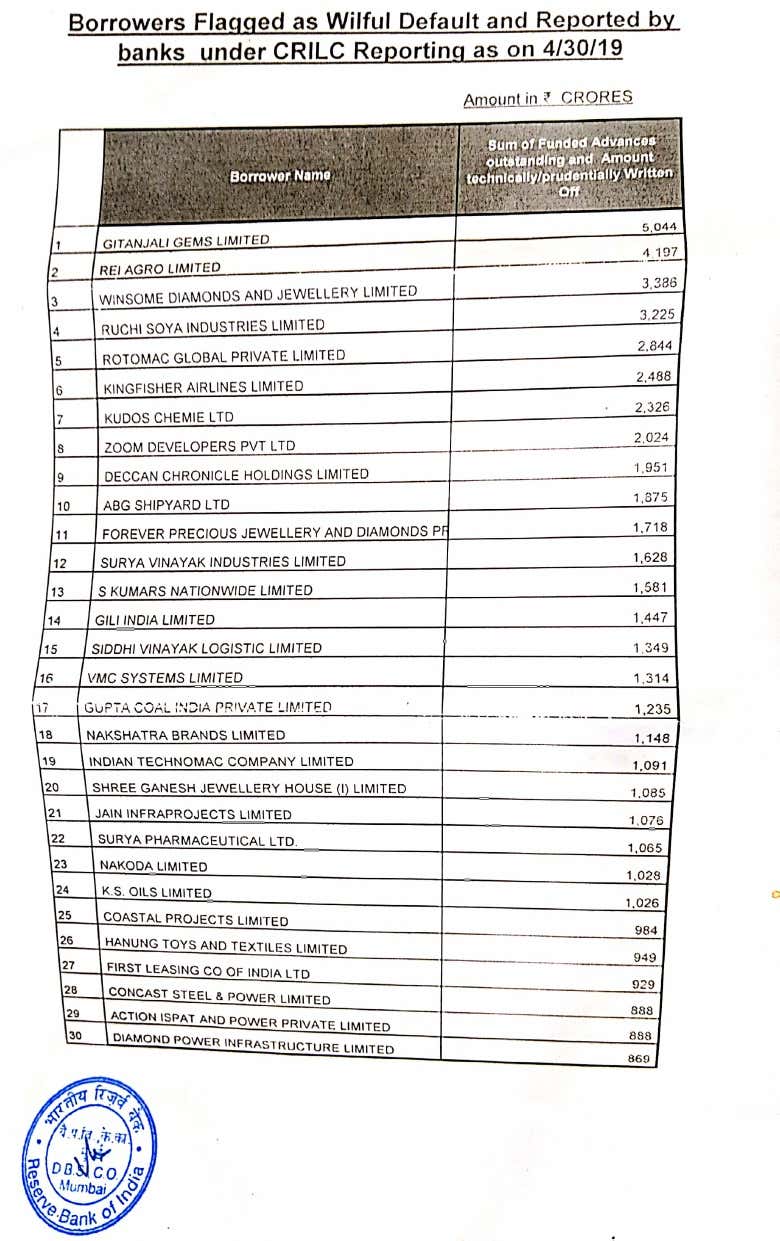 “To my knowledge, this is the first time that the RBI has disclosed information on wilful defaulters under the RTI act,” former information commissioner Shailesh Gandhi told The Wire.

Although, even now the RBI has not been entirely transparent. In the RTI application, The Wire had also asked it to provide: 1. a list of top 30 borrowers with highest amounts of outstanding debt, 2. the top 30 accounts in the non-performing assets category.

On the question of top 30 borrowers, the RBI refused to provide information saying that as per section 45 (E) of the RBI Act it is ‘prohibited from disclosing credit information except under certain conditions as stated in the act’.

It also said that para 77 of the Jayantilal Mistry judgment noted that ‘such information is exempted (sic) from public disclosure’.