New Delhi: As many as 12,313 electoral bonds worth Rs 6,128 crore were sold by the State Bank of India, the only entity authorised to sell them in the country, between March 2018 and October 2019, an analysis by the Association of Democratic Reforms (ADR) has revealed. ADR is a non-partisan NGO that works in the field of electoral and political reforms.  Most of these Rs 6,128 crores were spent on bonds bought in Mumbai (Rs 1,880 crores), followed by Kolkata (Rs 1,440 crores), with Delhi (Rs 919 crores) and Hyderabad (Rs 838 crores) also making it to the four cities where most purchases were made. All other cities together accounted for a total of Rs 1,051 crores.

12,313 electoral bonds worth Rs. 6128 crore sold from March 2018 to Oct 2019#electoralbond Most of these bonds have been redeemed by political parties.  A Right to Information (RTI) request from the State Bank of India (SBI) earlier this year had revealed that electoral bonds worth Rs 3,622 crores were sold in just two months right before the Lok Sabha elections – April 2019 (Rs 2,256.37 crores) and May 2019 (Rs 1,365.69 crores). Electoral bonds have been widely criticised for their opacity and are available in denominations varying from Rs 1,000 to Rs 1 crore. Any Indian citizen can buy them and deposit it in the account of any political party. 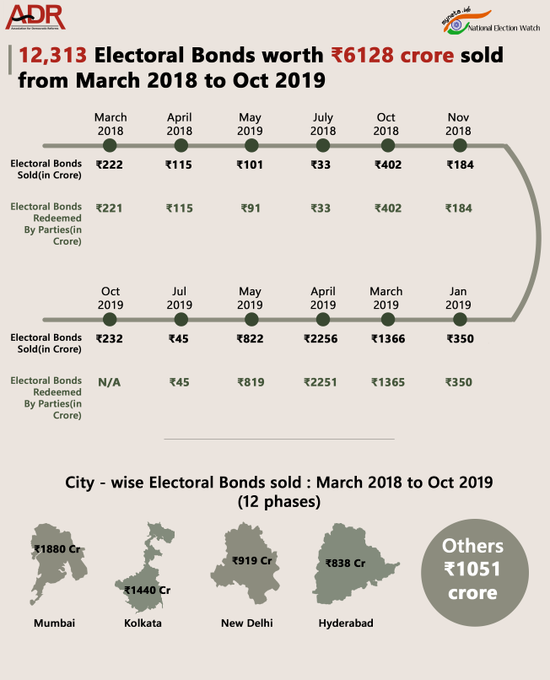 The system was started in March, 2018. The scheme has been on for 20 months now. However, bonds have only been sold in the last 12 months.

The ruling BJP has received a majority of funds from electoral bonds and there have been speculation that most of the electoral funding by corporates goes to the ruling party. The BJP received Rs 210 crore of the overall Rs 221 crore of bonds redeemed in the financial year of 2017-18, the Congress received only Rs 5 crore and the rest of the parties together received Rs 6 crore.

“The Supreme Court had said in April that this is an important matter and requires detailed consideration. After that, it hasn’t had the time to take it up again. The possibility of unaccounted money being used in elections continues to exist. This is bad for democracy,” Jagdeep S. Chhokar, founder of ADR,

A petition by ADR which is being heard in the apex court has argued against this funding scheme that guarantees anonymity. This, the petition argues, enables the passage of black money to political parties through shell companies.

Dharna at Collector office in protest against the arrest of the...

BSNL: No Wages in 10 months, 7 Contract Workers Kill Themselves