Desi Disa – Bahul Bahujan Voice
Home News ‘The clock is ticking’: race to save 2 million from statelessness in... 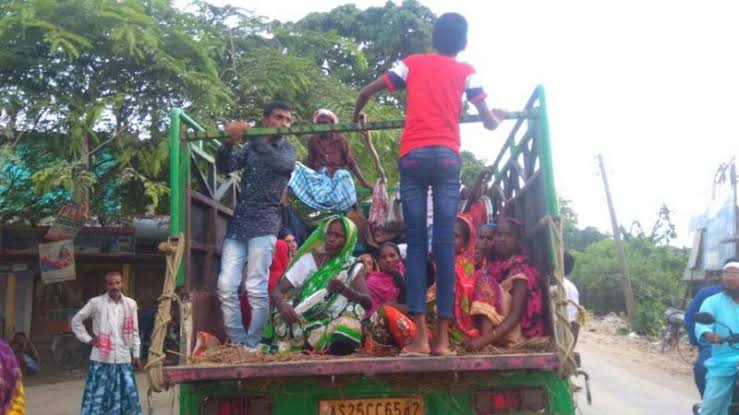 When she was one, Suro Devi was rescued by a sewer cleaner from a rubbish dump in Assam, northeast India. When the state of Assam started a massive exercise to register its citizens in 2015, Suro Devi did not have a birth certificate, information about her parents, a voter list with her name on it, or anything to prove that she had lived in Assam before 25 March 1971. She seemed destined to be left off the National Register of Citizens (NRC) and become stateless, and perhaps spend the rest of her days in a detention camp.

But Zamser Ali, a citizenship rights activist based in Assam’s capital, Guwahati, heard about Devi’s case. He knew that documents were not the only thing that could prove your origins. He managed to track down five eyewitnesses to her rescue from the dump. And in August, when the draft NRC was published, Devi’s name appeared on it.

“You have to be creative in these situations,” says Ali, on his way to a small village to train two dozen men on how to defend their communities’ citizenship rights.

Ali leads the Assam chapter of the Citizens for Justice and Peace (CJP) organisation and is overseeing a huge effort to train more than 1,000 volunteer paralegals in the state. In three months, they have certified about 200 people. The plan is for these volunteers to help the nearly 2 million people whose names were left off the NRC and who now face becoming stateless.

The register is aimed at stripping the citizenship of people whom authorities describe as illegal immigrants from Bangladesh. People have to prove that they or their family moved to Assam before March 1971, when neighbouring Bangladesh gained independence. Those who are left off the final list face going to detention camps or being deported.

Everyone has a chance to appeal the draft list, and Ali, a journalist turned activist, is leading the charge to help people do so.

“I spent only three nights sleeping in my house over the last month,” he says, while peeling some oranges bought on the roadside on his way to the village of Batadraba, in Nagaon district. He left journalism in 2018 to devote himself full-time to fighting the NRC. He speaks “10 or 11 languages”.

The training was almost cancelled after police pressured the principal of a school where the group was due to meet to back out. A farmer, recognising Ali from TV, offered his house instead.

“This is not without its challenges, but you can see how much the community supports us,” Ali says.

CJP simplifies the legal procedures, evidentiary rules, and judicial precedents relevant to contesting citizenship. But Ali also acts as a counsellor and sounding board.

“We are going to fight this together,” Ali tells them.

One man at the training explains how two of his four siblings didn’t make it on to the registry because some of them had written their father’s name as “Hussein Ali” and the others as “Hussein Ali Sheikh”.

“In more than 15 notices posted since 2015, the NRC authority has said that some discrepancies in name, title, and age are not a concern,” Ali tells him. “And if any confusion arises one may take oral witnesses from local people. You have all sorts of opportunities.”

In late November, the NRC authority is due to tell people why their names were not included, after which they will have exactly 120 days to provide evidence to the contrary.

“I think, out of the 1.9 million names omitted, not more than 800,000 are truly undocumented,” says Ali. Informal name and address changes, a loose grip on documents like birth certificates, illiteracy, and intimidation by local politicians are among the reasons why so many legitimate residents were left off the register.

The men in Batadraba are farmers, teachers, and shopkeepers. One has travelled two hours by motorbike. Most of them have made it onto the draft list, but a few were preparing to litigate their own cases too.

“If a linkage is established between you and your kids, it will be fine, they can’t ignore it,” says Ahmed.

CJP has an extensive and low-cost toolkit. Volunteers help people find old state voter lists or help them investigate where exactly their parents and grandparents lived. They petition local officials who block access to records. They help people find notaries to certify documents like their birth certificates.

Ahmed and about 30 other lawyers working with CJP have prepared handouts for the paralegals on a number of legal topics, including the exact wording that should be used on written depositions. He told a cautionary story of how one man wrote in his deposition that he is of “Indian origin” and not an “Indian citizen,” so he was declared to be a foreigner.

One of the volunteers, 38-year-old farmer Hasan Ali, tried to hang himself last February for fear his name would be left off the list. Luckily, he was spotted by a neighbour and CJP volunteers rushed to counsel him. With CJP’s help, he made it on to the draft NRC and was so grateful he decided to become a volunteer paralegal.

“CJP showed me that there is no such thing as an impossible case,” he said.

There are already six detention camps in Assam for people deemed to be foreigners, as well as about 100 tribunals for people contesting their status. Eleven new detention camps are planned in the aftermath of the NRC exercise, and 200 more tribunals are expected to be set up.

The NRC has a distinct religious aspect under the current Hindu nationalist government. India’s home minister has promised a controversial citizenship amendment that would let undocumented “Hindu, Sikh, Buddhist, Jain and Christian settlers” stay, but not Muslims. A huge number of Hindus were left off the draft NRC.

“We are working in a complicated time when Hindu-Muslim divisions are very sharp. It’s time to work not just for Muslims, but also for the Hindus excluded by the NRC,” Ali tells the volunteer group, which is mostly Muslim, but includes two Hindus.

Ali’s name appears on the draft NRC, but he notes that even he, with relatively many resources, needed seven years to gather the necessary paperwork.

“The real test will start next month, when the clock starts ticking on people’s cases,” he says as he leaves the village. He will hit the road again on Monday. “It’s very easy to lose hope, but that is why we have to work hard.”

… in the last month. If you’ve enjoyed reading, we hope you will consider supporting our independent, investigative journalism today. More people around the world are reading and supporting The Guardian than ever before. And unlike many new organisations, we have chosen an approach that allows us to keep our journalism accessible to all, regardless of where they live or what they can afford. But we need your ongoing support to keep working as we do.

The Guardian will engage with the most critical issues of our time – from the escalating climate catastrophe to widespread inequality to the influence of big tech on our lives. At a time when factual information is a necessity, we believe that each of us, around the world, deserves access to accurate reporting with integrity at its heart.

Our editorial independence means we set our own agenda and voice our own opinions. Guardian journalism is free from commercial and political bias and not influenced by billionaire owners or shareholders. This means we can give a voice to those less heard, explore where others turn away, and rigorously challenge those in power.

Government needs to talk to protesters

Brutalising Innocence: A report on police excesses on minors in UP

A Song By Chinnakandukur Village Artists, On BLF Protection Rally, 2...