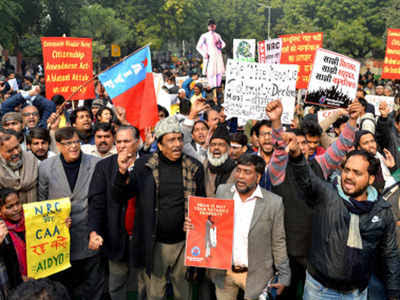 The forum named itself after the opening line of Indian constitution’s preamble – We, the People of India – which has also become a rallying call in most protests.

New Delhi: Around 100 organisations have come together to form a joint forum to carry out protests against the controversial Citizenship (Amendment) Act, the National Population Register and the proposed all-India National Register of Citizens.

The forum named itself after the opening line of Indian constitution’s preamble – We, the People of India – which has also become a rallying call in most protests.

The forum decided to host a series of nationwide protests and dharnas from January 2020 onwards, The Hindu reported. The group also said that civil society groups in different places will rally against CAA-NRC-NPR to commemorate birth or death anniversaries of important people, starting from January 3, the day social reformer Savitribai Phule was born.

It also resolved to join the Left-backed Bharat Bandh on January 8 and other protests organised by farmers’ and workers’ unions subsequently. The group will also organise demonstrations on January 12, the national youth day and Swami Vivekanand’s birth anniversary.

“On January 17, which is the day when Rohith Vemula was killed by this administration, we will celebrate social justice day. On January 14 and 15 is Sankranti, when we assimilate all people of all cultures together. On January 26, we will raise our flag at midnight and on January 30, which is the death anniversary of Mahatma Gandhi, we will form a human chain across the country,” said Yogendra Yadav, founder of Swaraj Abhiyan party.

Human rights activist Harsh Mander, who is one of the leaders of the forum, said that the proposed nationwide NRC, combined with NPR database, will allow the government to pick and choose “doubtful” citizens.

“It’s a project that’s so large and so unimplementable. The ultimate objective of a CAA and NPR and NRC is to throw our Muslim brothers and sisters into a vortex of uncertainty for years and years. Your life comes to a halt and all you can think about is where can I get that document,” he said.

Teesta Setalvad, eminent human rights activist, slammed the CAA, adding that the government’s plan to determine citizenship on the lines of religion has to be opposed. “This is a really historic moment. I haven’t seen the kind of citizen participation since the Emergency,” she said.

Many other activists like student activist Umar Khalid spoke of boycotting the NPR and NRC when the process starts.

“The undocumented in the country are worst affected. They understand the intensity of the suffering that they are going to face due to this,” renowned linguist and activist Ganesh Devy told The Hindu.

An eerie quiet: At the stroke of midnight on March 24, India suspended ‘politics’

The CAA is Against Bahujan Emancipation