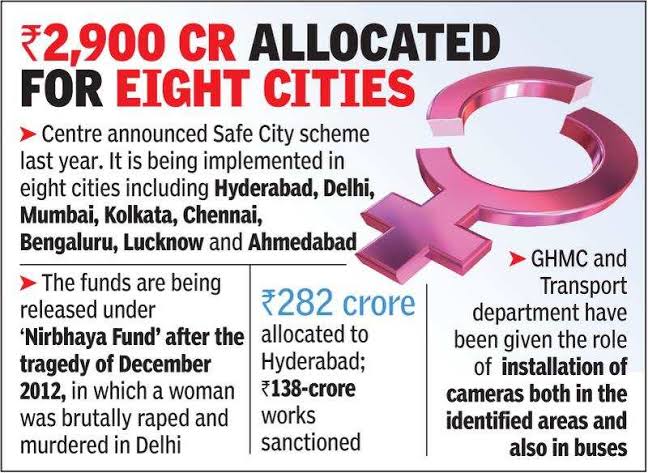 HYDERABAD: The central government’s Safe City project with an objective of strengthening safety and security of women in public places is a non-starter in Hyderabad, which was among the eight cities in the country where the project was conceived to make them safer for women.

The Telangana police department, which is coordinating and executing the project, took almost a year to prepare the proposals, sources said.

Lucknow was the first city to roll out the project in November 2018, while Lucknow, Delhi and Mumbai have started executing it. An amount of Rs 282 crore has been appraised for Hyderabad.

Inspector general of police (women safety) Swati Lakra, who is also convenor of the Safe City project, said it took one year for planning, preparing budget proposal and getting permissions. The project would be completed in three years, she said. The police department has proposed several measures like installing 3,000 CCTV cameras in buses and isolated places and also where there is very less movement of people, enhancing the capabilities of ‘Dial 100’ and also linking it to the command and control centre being set up by the police department for emergency response when women call up Dial 100.
Special forensic science laboratories and mobile forensic units for onsite visits during investigation, SHE toilets and establishment of Bharosa centres are also proposed. “Many new components are included in the proposals like transit dormitories for women, who come to the city for purposes like attending an interview or examination and stay a day or two here. Similarly, elevated cameras have been proposed to aid SHE teams in nabbing people involved in crimes against women,” Swati Lakra told TOI.

Apart from Bharosa centres, separate counselling centres have been proposed under the scheme to guide women in distress. “Since the state government is focusing on curbing crimes against women, exclusive forensic science teams will help in speedy disposal of the cases,” she said. Officials said Rs 138 crore was sanctioned under phase I. The state government will bear 40% of the total cost, while the Centre will release 60% fund after the state submits utilisation certificates.

The project will be implemented in Hyderabad (south zone), Cyberabad and Rachakonda police commissionerates.

Senior officials said installation of CCTV cameras in buses could be taken up without any further delay. “But, we could not go ahead due to assembly and Lok Sabha elections and other exigencies like Ganesh idols’ immersion bandobust duties,” an official said.

The project is also implemented in Kolkata, Chennai, Bengaluru and Ahmedabad.

Frequencies at which sounds are disturbing, and how brain reacts