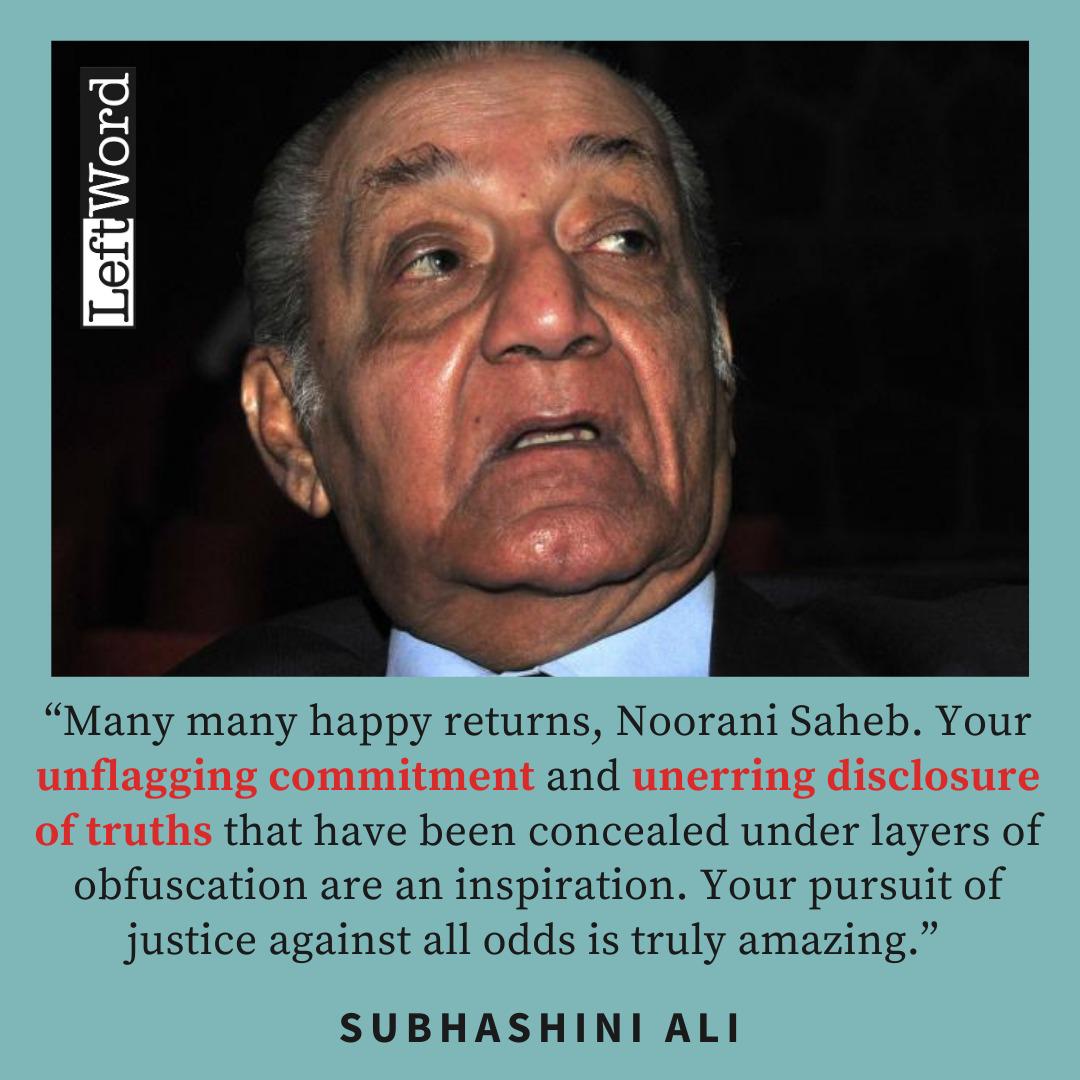 The legal luminary and prolific writer, receives birthday wishes from activists, writers and lawyers on his birthday

Abdul Gafoor Majeed Noorani was born on this day in 1930 in Mumbai. Today, at 90, the former lawyer who has practiced in both, the Bombay High Court as well as the Supreme Court, is still going strong, sharing his wisdom as a Constitution expert, political commentator and prolific writer.

Noorani has many books to his credit on a variety of subjects ranging from geo-politics, to history, to Constitutional law and even religion. Some of his most celebrated books are:

SabrangIndia co-founder, journalist and activist Teesta Setalvad, looks up to Noorani as modern India’s foremost scholars and visionary thinkers. She says, “The sight of Noorani saab in the Bar Council Library on the top floors of the Bombay High Court was a regular heartwarming sight; few moments in his presence, seeking answers to questions others don’t ask, many do not answer. His astute understanding of the 1970s Bhiwandi Violence (that resulted in the epochal Mandon Commission Report) was sharp. His exploration of the secular foundations being uprooted from Indian state and society, bit by bit, rare.”

Setalvad, who has extensively worked in the field of defending rights of persecuted and oppressed minorities, adds, “His purveys into the Indian State’s excursions and failings on Jammu & Kashmir, on Communalism, then delving into the RSS itself and Hindutva ideologue, Savarkar are fine and meticulous attempts at historicising the efforts and impact of a proto-fascist force capturing and seizing democracy.”

The human rights defender has another reason for looking up to Noorani. “In him and my father Atul Setalvad, who we lost ten years ago, I see such similarities: men of great depth, brusque –almost rude in demeanor –but who always nurtured young minds to immense growth and questioning. I have personally had the good fortune, having long conversations in the Bar Library, meeting at his home in south Mumbai, reading rare books he shared with me and even being a co petitioner with him, my father, Alyque Padamsee, Kuldeep Nayar and Javed Anand in an intervention in the Babri Masjid demolition case in the UP Courts in the 1990s.”

To make the day extra special, Sudhanva Deshpande, managing editor of LeftWord Books, a publishing house that has brought out several of Noorani’s books, decided to collect birthday wishes and greetings from his well-wishers and share them with Noorani.

“Noorani ji does not use email or even text messaging. I thought when I call him to wish him, it would be nice to read out messages from other well wishers as well,” says Deshpande, a theatre director, actor and prolific writer himself.

“He writes everything in long-hand and then sends it to a particular typist who sits outside the Bombay High Court. Apparently, he is the only one who can decipher his handwriting,” says Deshpande, shedding light on Noorani’s curious writing process.

“This typist then types out and sends Noorani ji the first draft to which he makes changes and corrections in long hand and sends back to the typist,” he adds.

Deshpande has many fond memories of meeting Noorani over the years. “I remember visiting his house and discovering how every square inch was covered in books. There were books on his bed and even on the floor! Plus, he maintains an elaborate filing system of newspaper cut-outs that he consults from time to time while authoring his books,” shares Deshpande.

“When he would come to Delhi, we would go to his favourite chaat stall run by a man locally known as ‘UPSC chaat wala’ because his stall is just outside the UPSC office. I remember Noorani ji ordering spicy chaat and tikki,” reminisces Deshpande.

Here is a collection of birthday wishes collected by LeftWord Books and being published with their permission: 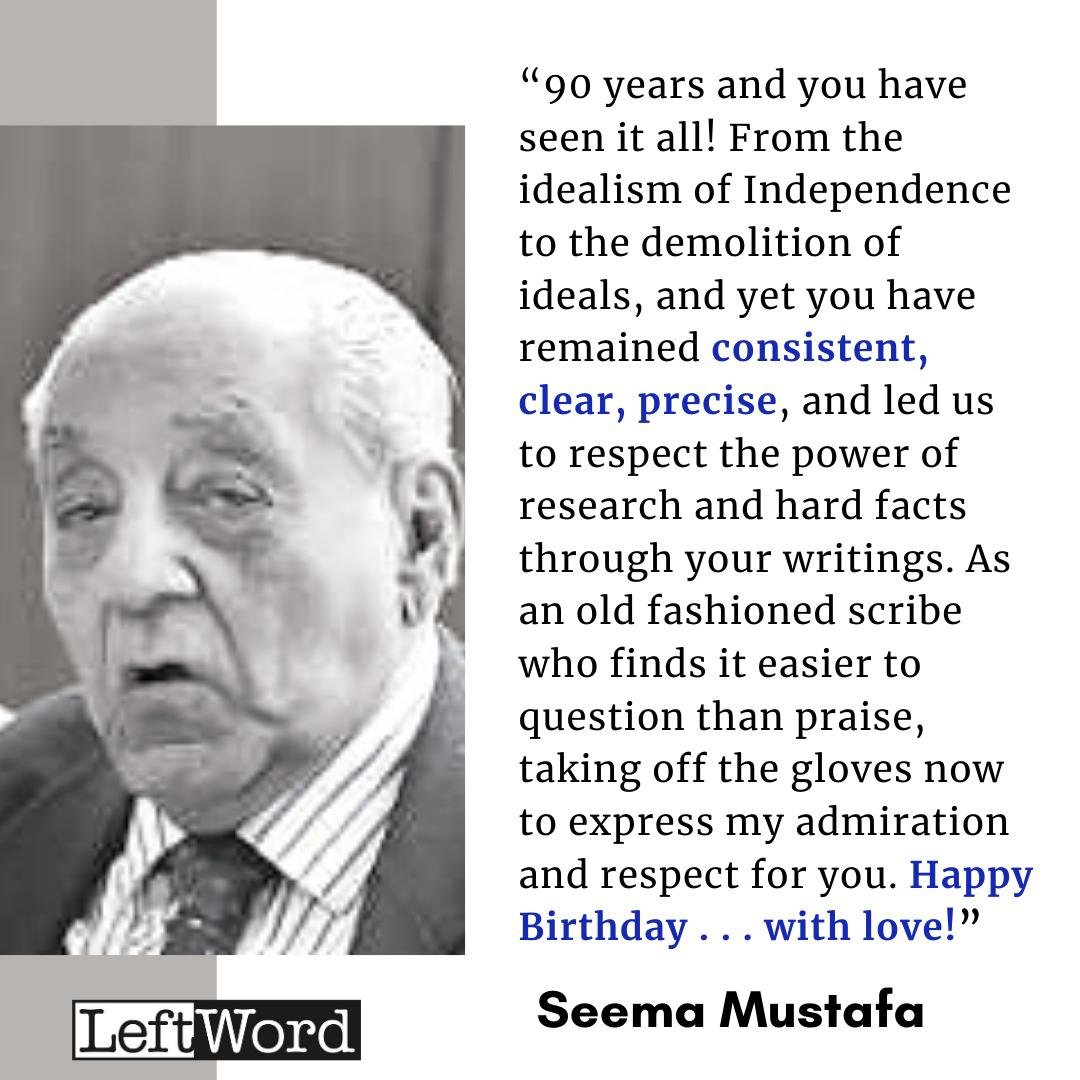 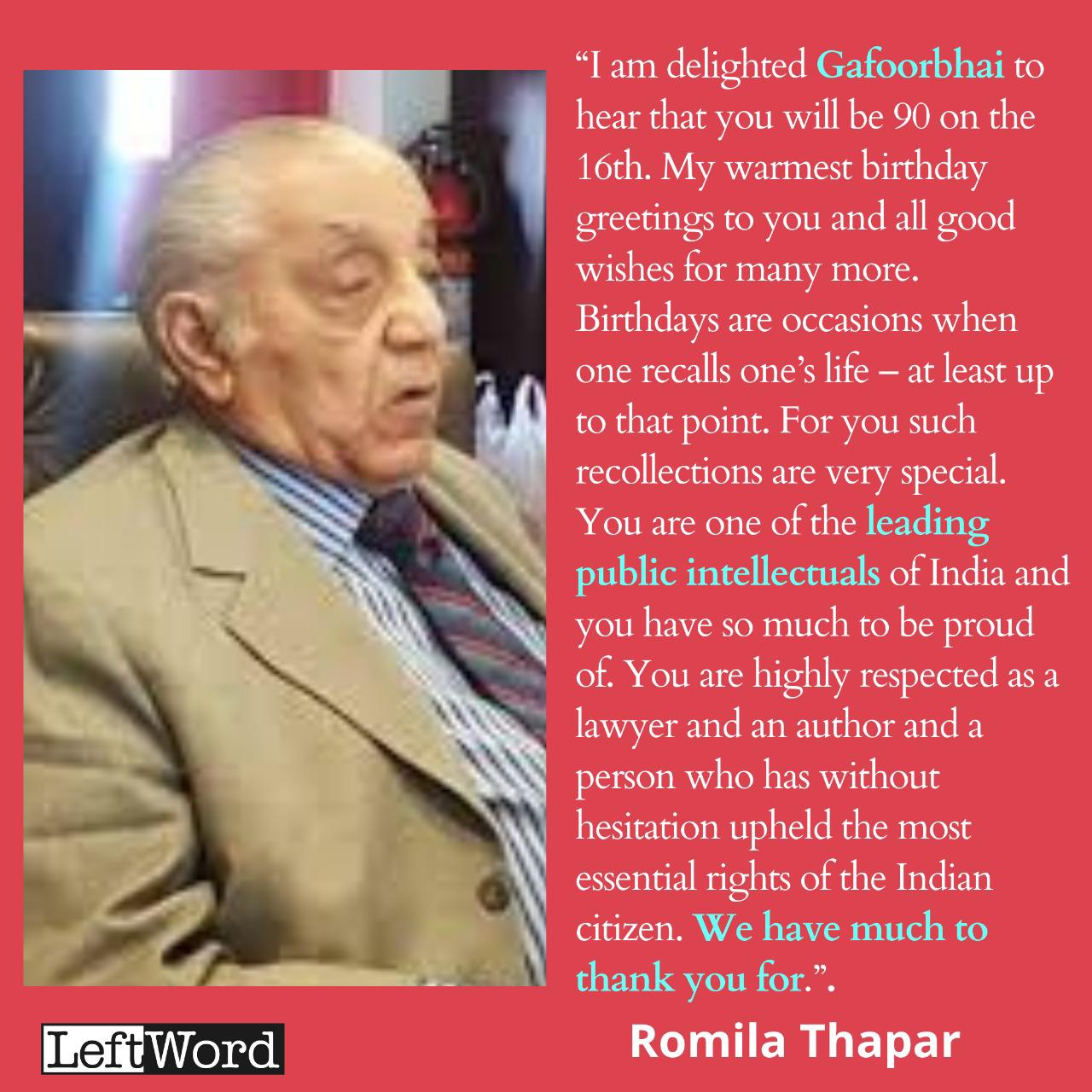 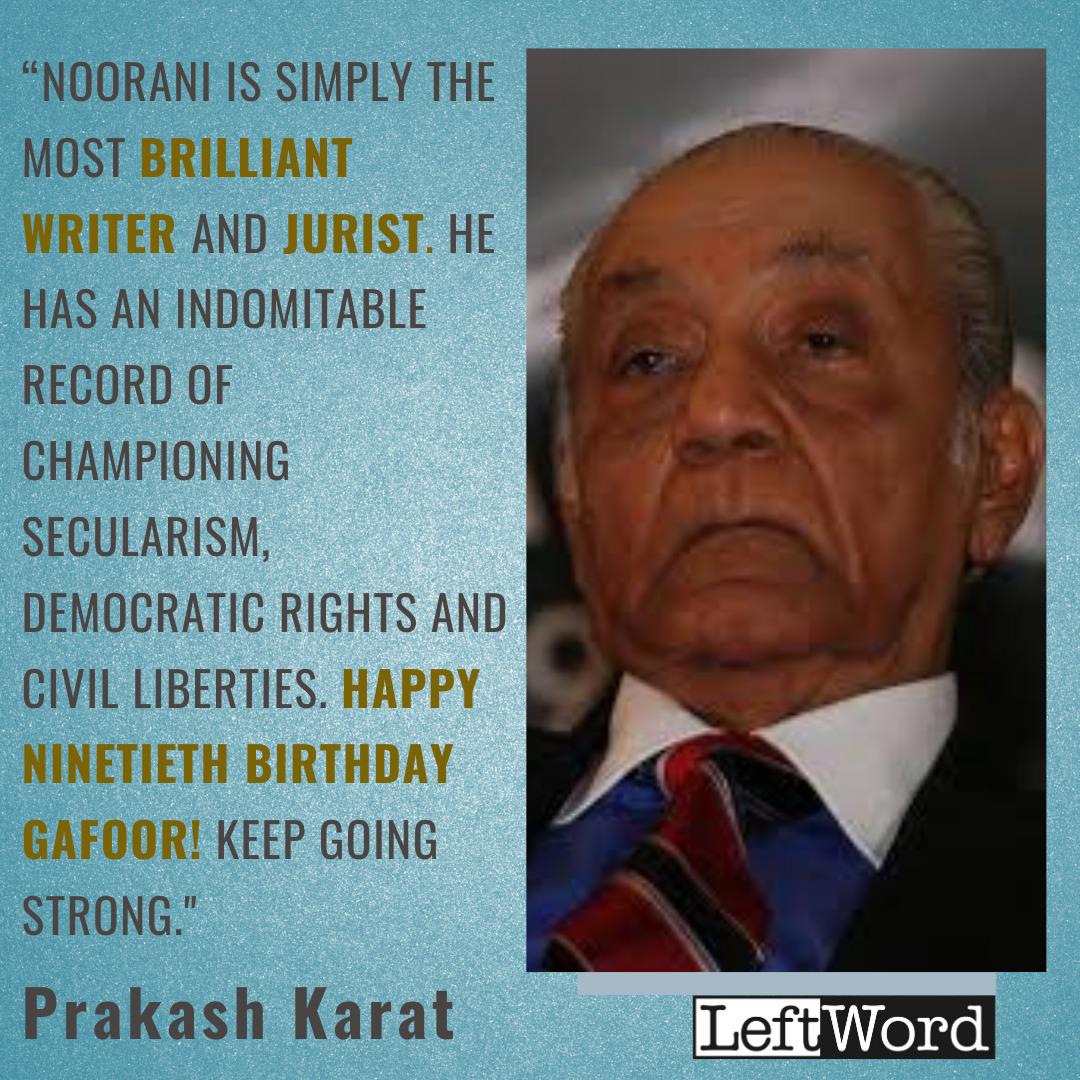 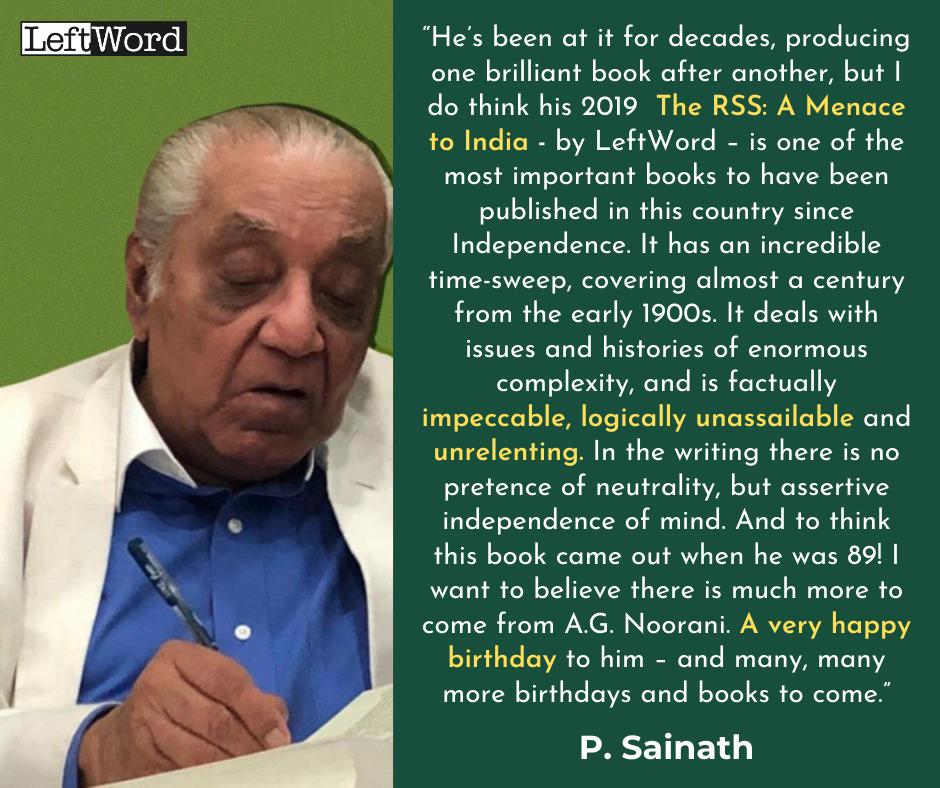 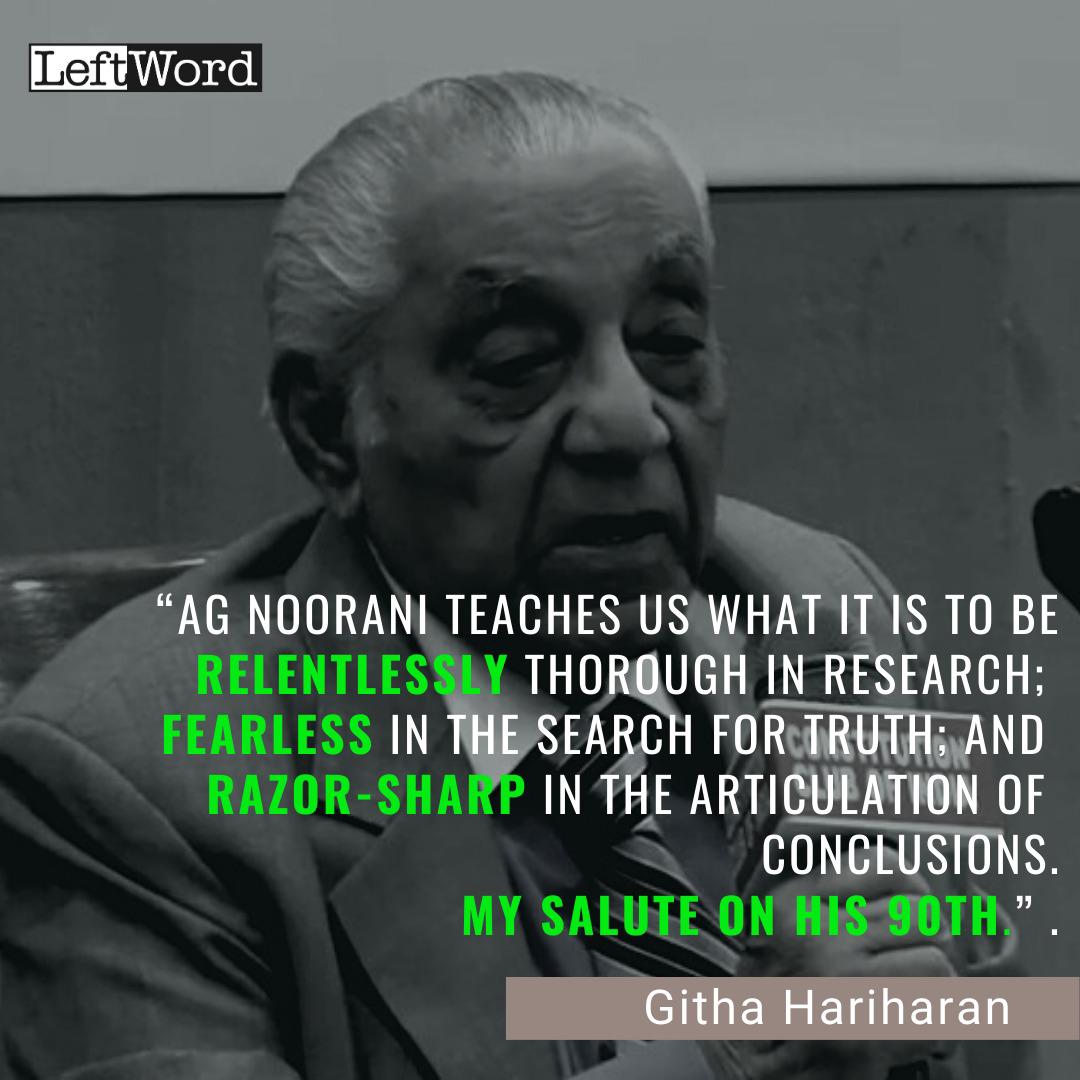 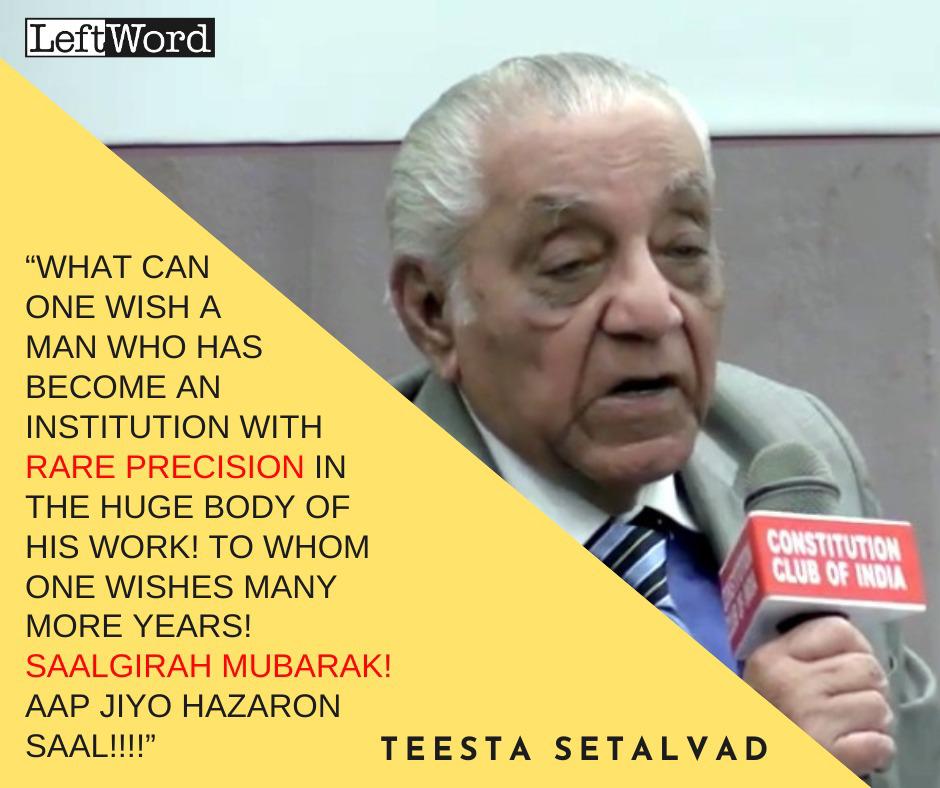