Coronavirus updates: Doctors from Siliguri in the east to Kashmir in the far north of India at the frontline of the fight against COVID-19 have complained, even threatened to go on strike because of the lack of personal protective equipment (PPE)

As the coronavirus advances in India, a mass of evidence points to how crucial delays by the government in placing orders for safety wear may have exacerbated the shortage in India, potentially placing at risk thousands of healthcare professionals.

Further, when these contracts finally went out, they seem to have gone to a dozen small domestic companies, with barely the output needed for India’s massive requirements.

Doctors from Siliguri in the east to Kashmir in the far north of India at the frontline of the fight against COVID-19 have complained, even threatened to go on strike because of the lack of personal protective equipment (PPE) – specialised coveralls, gloves, goggles, masks and so on.

The complaints are not unique to India. 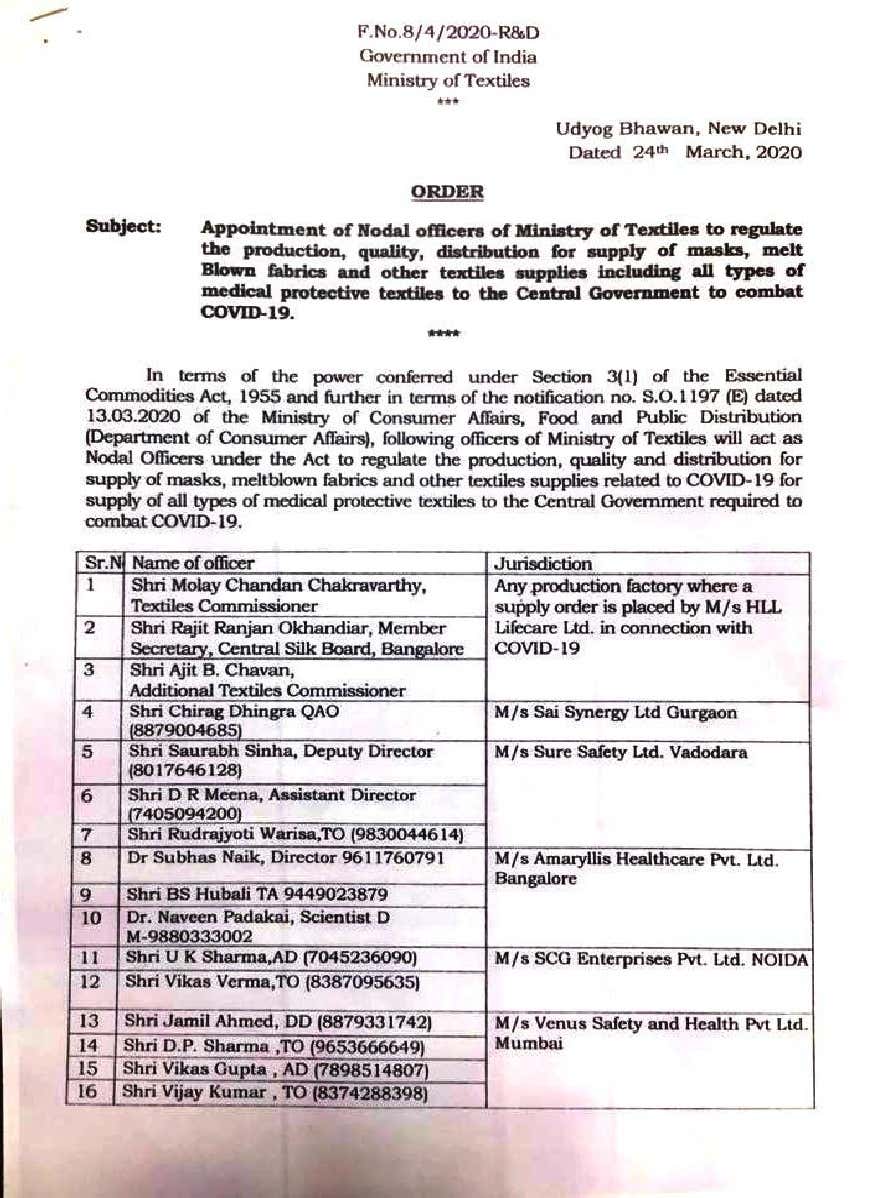 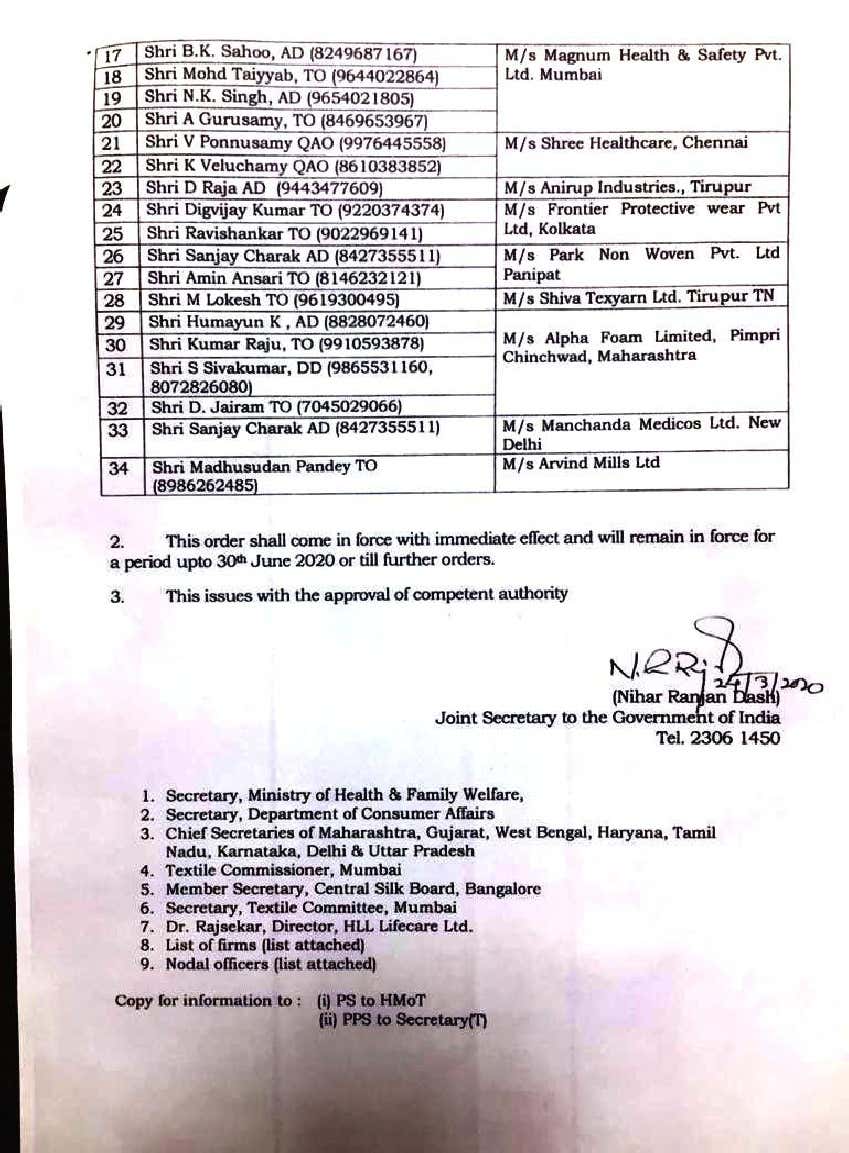 NDTV has found, however, that the Indian government scrambled to place orders for PPE as recently as a week ago, just before, on or after the day India went into a three-week lockdown. By this time, the disease had firmly taken foot in India for at least eight weeks, with 1,637 infected and 38 dead.

Moreover, with the lockdown in place as the first orders went out, the manufacture and supply of protective wear, even though an exempted category, would face tremendous disruption, which the government itself would cite to justify nearly month-long delays in being able to deliver safety wear to hospitals.

The late response has also limited the government’s options of importing safety wear, making it dependent almost entirely on domestic manufacturers. The government has been persistently evasive in dealing in sharing specifics of its projected needs for safety wear, and how it plans to meet them.

The closest indication surfaced only on March 23, the day before the lockdown, when the government uploaded the final modification of a domestic tender outlining its requirement for safety wear.

The tender, put up on the website of HLL Lifecare, a government-run company appointed as the nodal body to procure safety wear for the centre and state governments, modified the first version of the same document dated March 3.

On the same day, the Health Ministry in a statement said it was in touch with safety wear makers since February, and that samples submitted by six Indian firms had recently passed quality control tests.

The push to source from India, it said, was because of the global shortage of coronavirus safety wear. There was no mention of the names of the companies, or how they would match the massive quantities mentioned in the tender. 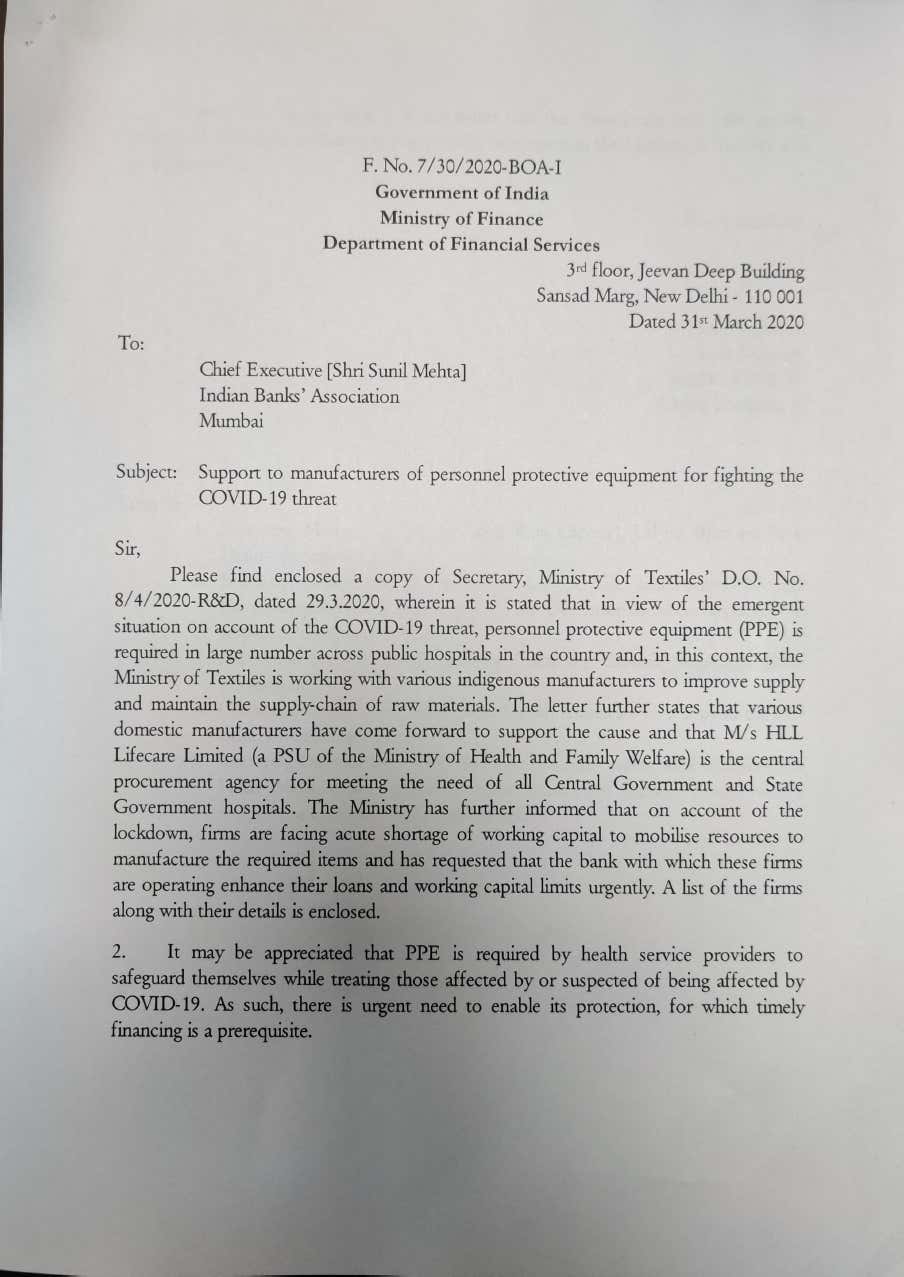 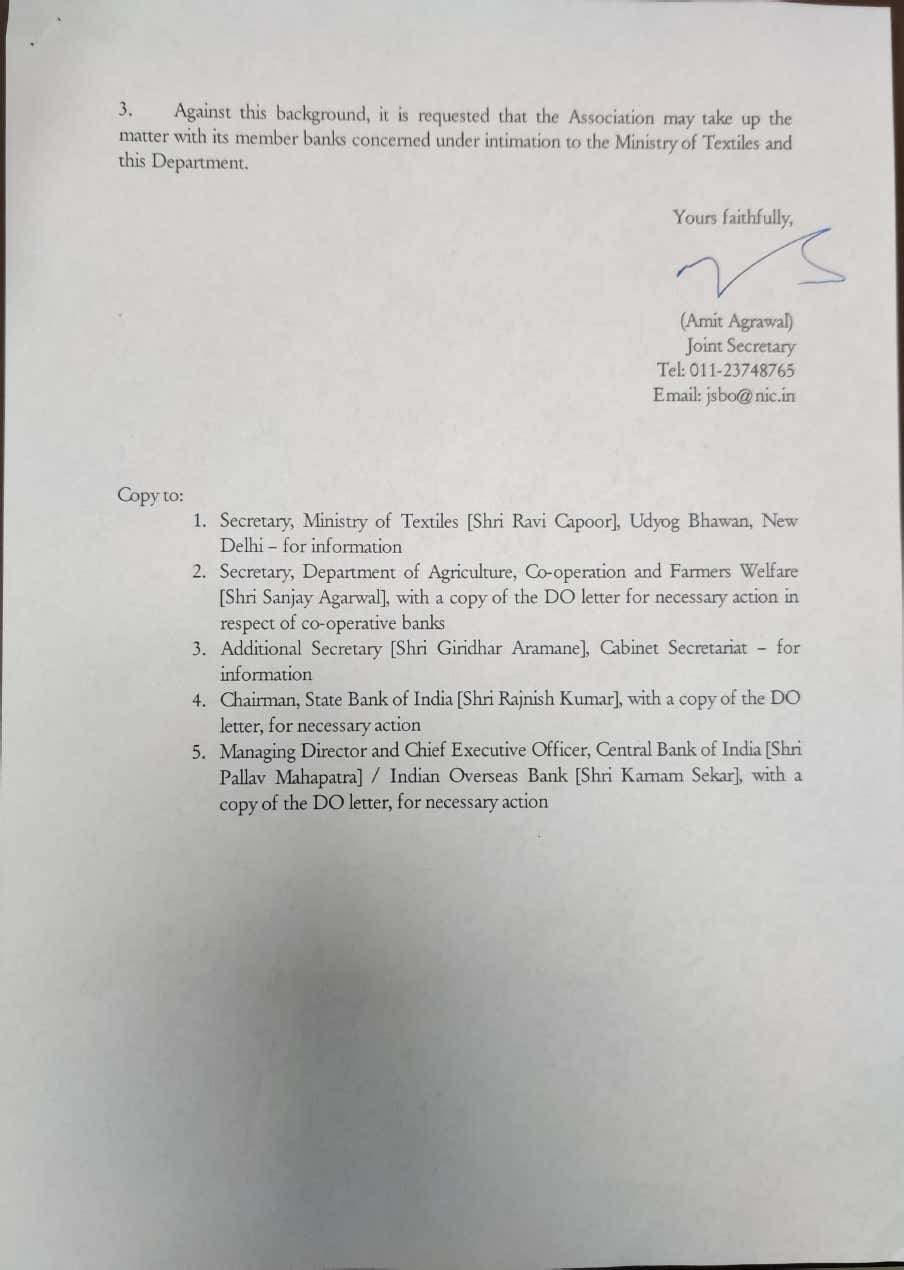 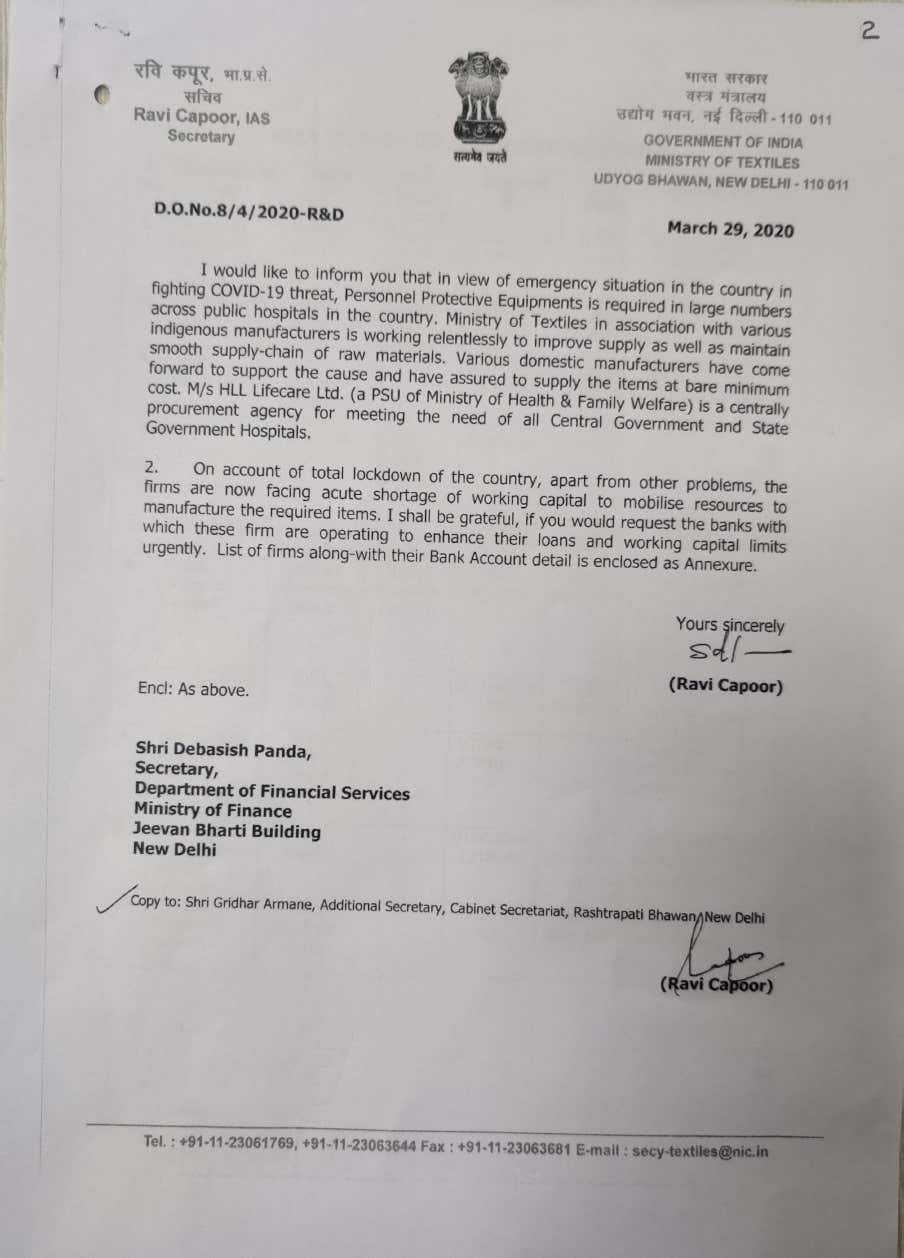 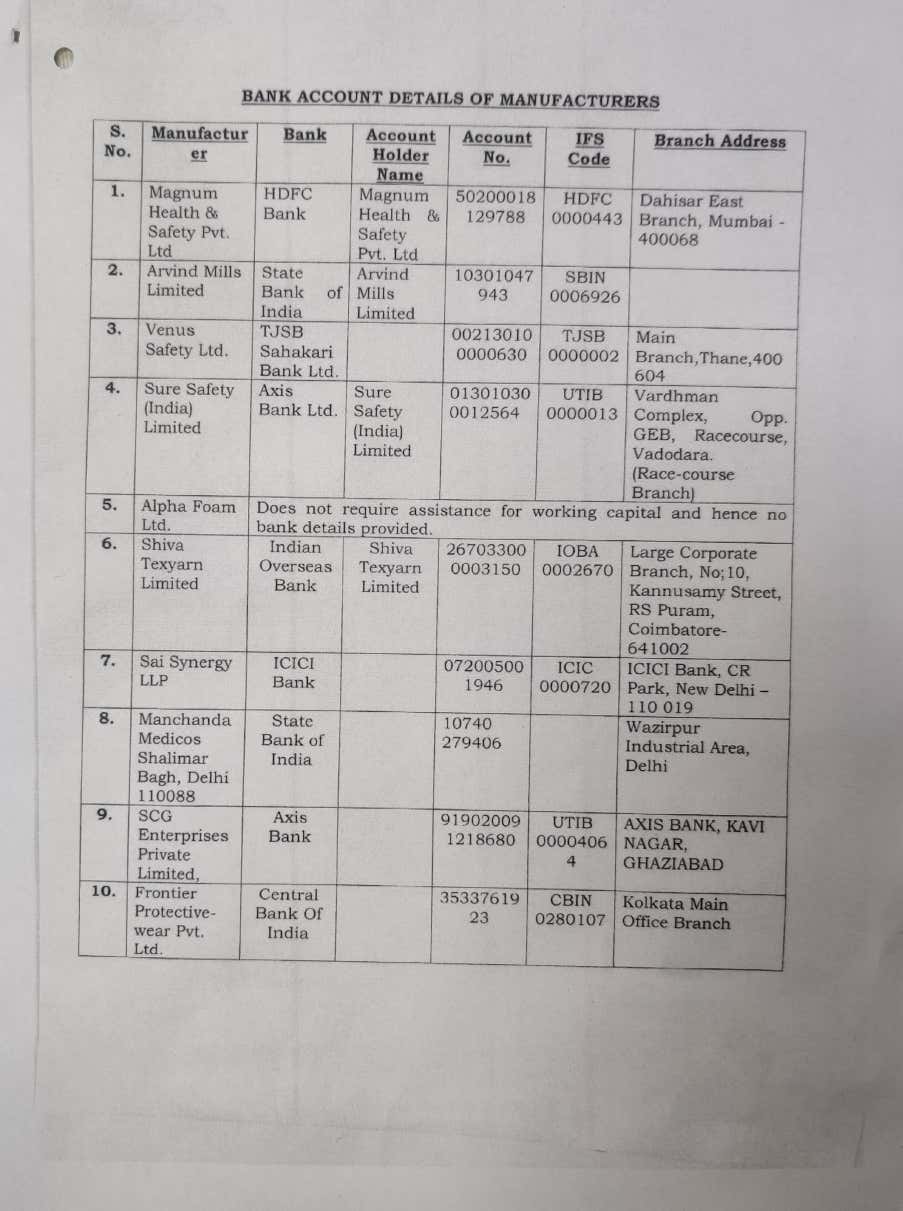 The very next day, March 24, it uploaded a global tender, seeking exactly the same amounts. On March 30, the ministry put out a more detailed statement, claiming that 11 Indian companies have been given contracts to supply 21 lakh coveralls. A twelfth, they said, was signed on that very day, for supplying five lakh coveralls.

The statement said orders had been placed by the government to import 30 lakh coveralls from South Korea and Singapore. No dates were mentioned of when these orders would arrive.

While this statement too neither named the companies nor mentioned when orders had been placed with them, it did mention their collective output: 6,000-7,000 pieces a day. This, the government says, was expected to double in a week to 15,000 pieces a day.

NDTV reviewed a list compiled by the Textiles Ministry of 14 Indian safety wear companies that appear to have been contracted by the government, each of whom have been assigned a set of nodal officers to oversee production and quality.

The real reason, a safety wear maker on the list told us, is to smooth over the logistical hurdles thrown up by the lockdown. The list is dated March 24.

Two of the 14 companies make fabric used in coveralls and masks.

Of the remaining 12, we contacted 11 companies – either the companies directly or the nodal officers assigned to them. Nine of the 11 companies said they had got the go-ahead to begin production on or just after March 24, the day of the lockdown.

Some companies, like Vadodara-based Sure Safety Ltd and Bangalore-based Amaryllis Healthcare Ltd, have been producing coveralls since March 24 at the rate of 500 and 1,500 pieces a day, respectively.

Others, like Tamil Nadu-based Anirup Industries and Shiva Texyarn Ltd have only begun production two days ago, at the rate of 100 and 500 pieces a day, respectively – numbers that come nowhere near meeting India’s massive requirements.

The nodal officers attached to two manufacturers of safety gear, Noida-based SCG Enterprises and Kolkata-based Frontier Protective Wear, said they are yet to start production.

As these companies began production, they appear to have been hit by another consequence of the lockdown – a drying up of bank finance.

Again, the government appears to have scrambled to undo the damage caused, in a sense, by its own delay in placing orders.

In a letter on March 29, the Secretary, Ministry of Textiles, wrote to the Finance Ministry, saying “on account of the lockdown… the firms are now facing an acute shortage of working capital to mobilise resources to manufacture the required items. I shall be grateful if you would request the banks with which these firms are operating to enhance their loans within working capital limits.”

The attached list of 10 safety wear manufacturers corresponds to the 14 firms named in the above list, of nodal officers assigned by the Textile Ministry.

Two days later, on March 31, the Finance Ministry wrote to the Indian Banks’ Association, asking for assistance for these companies from the association’s member banks.

Employees allege companies are forcing them to resign, leaving no trace of layoffs

It’s Time for a Solidarity Tax

Policing in the times of corona has many tones, depending on...

Seven Decisions That Can Prevent the Lockdown From Becoming Another Policy...